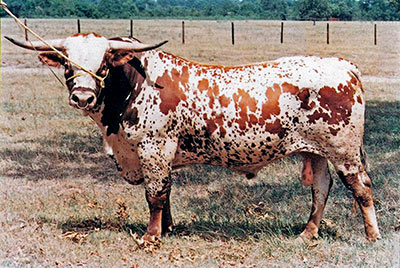 Right Hand Man ~~ In the late eighties I was showing Jet Jockey at halter. Richard and Louann Crist, of Scott City, KS, were showing an equally pretty bull named Right Hand Man. In the dozen shows prior to the TLBAA World 1988 show each bull would trade the All Age Grand Champion bull award. If the judge liked a pretty symmetrical head, very thick hip, thick forearm and beef conformation RHM won. If the Judge liked more T2T horn, a little more height and about the same conformation, Jet Jockey won.

Somewhere along the circuit RHM had an accident and crushed a testicle. It was determined to go ahead and castrate him to make a steer, then the Crists decided to just remove one testicle and try to save him for breeding. The first show was a flop -- the judge noticed it and RHM got a low placing. Next show Crists got a certificate of statement from the vet officially giving notice that RHM was a normal bull and genetically was okay, but had had a unique surgery. The next few judges received the official info and allowed him to win some more Championships. There was a lot of talk.

Jet Jockey and Right Hand Man faced off at the World TLBAA show. The championship hinged on one body part. As I was showing Jet Jockey, I noticed a representative of the authority walked out into the arena, talked to the judge and immediately Right Hand Man went down in the class and Jet Jockey was awarded World All Age Champion. Rumor was the "authority" told the judge in no uncertain terms that no bull with one testicle would ever be World Show All Age Champion.

Right Hand Man was huge in body, had about 42" horn T2T and represented a beef type of TL that was proving to the cattle industry that TL cattle were a competitive factor.

The Christs offered RHM for sale at auction. I encouraged George Wilhite to purchase him. I thought he was a bull that would make a strong contribution. George determined that several others were going to bid against him. He formed a partnership of the competitive bidders and bought him for $16,000. George immediately started doing ads to improve the tarnished RHM image. His adds were "IT ONLY TAKES ONE BALL TO MAKE A STRIKE."

Unfortunately RHM only sired a few calves and while servicing a Wilhite cow, under a large tree, during a lightning storm, a strike of lightning hit the tree, RHM and the cow -- dead at a young age. Today his polished skull hangs in George's library.

To show the fragile nature and importance of the foundation cattle, Right Hand Man sired one cow for Wilhite named TX W Rose Bud, she was dam of TX W Lucky Lady who was dam of Rio Grande who was sire of Rio Catchit, the dam of Cowboy Tuff Chex.

Now you know the rest of the story. Had it not been for one remaining body part, and a snap decision by the Crists, there would be no Cowboy Tuff Chex nor the whole Rio family. Every mating is important.