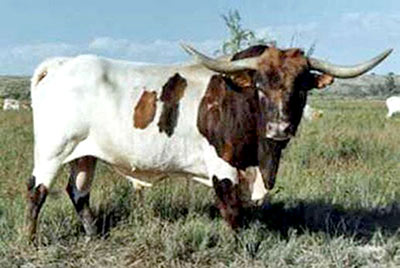 Rangers Ranch Hand - some history. In the mid seventies the Fort Niobrara Refuge in Valentine, Nebraska was improving their herd using the daughters of WR 1005 and WR 1052 which were WR 1839 and WR 1830. US 021 was raised by FN, sired by US 303, a son of WR 1839. I believe US 021 was the widest horned cow that was used by either refuge. (Measles was larger, but sold by mistake and never used by the WR) A daughter of US 021 was sold by FN to Bogert & Eakins registered as Linda. Eakins bought Texas Ranger semen from Dickinson Cattle Co and raised Rangers Ranch Hand in 1979.

There were a lot of Texas Ranger sons used all over the nation at that time. RRH had about 52" horn and that was one of the widest sons of Texas Ranger. Frank Doherty paid quite a bit for RRH and he was Frank's top sire for a few years. Frank sold a number of cattle to Tri W Ranch and RRH got in the batch.

Don King near Bartlesville, OK, managed a TL sale and Tri W consigned several cattle. Rangers Ranch Hand only got an $1100 bid and was POed. I did not attend the sale, but called Wayne Rumley and bought RRH the month after for $1500 which included 500 straws of RRH semen. In 1987 RRH was bred in Colorado at DCCI. This photo of RRH was taken at the DCCI Quixote division.

RRH sired a lot of very twist/cork screw cows. Several bought semen and successfully raised cork screw progeny. The best thing in the career of RRH was when he sired DH Red Ranger, a result of the 500 straws of semen collection.

After using RRH for 1 year I sold half interest to Haythorn Land and Cattle Co of Arthur, Neb, then that half was purchased by Jane Shephard, Happy J Ranch near Houston. Later Bob Coffee bought my other half and then Bob bought Jane's half in 1990. Bob was his last official owner.

As a result of Rangers Ranch Hand, DH Red Ranger sired Doug Stott's bull Wow and the M Arrow Houdini an over 80" bull. We flushed RRH to Doherty 698 and he sired Ranch Lady, one of the most cork screw cows ever. His life time registered calf record in TLBAA is 261.