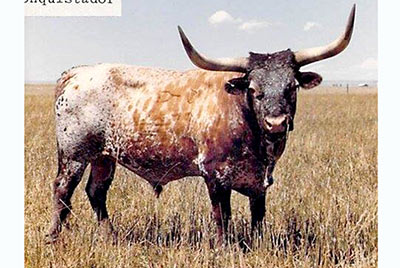 Conquistador - I first saw Conquistador at Blacky Graves' farm at Dayton, Texas. It would have been 1977 or 1976. When I first saw Classic, Conquistador and another adult bull were multiple sire breeding the Graves' herd of about 25 or 30 cows. Graves had Monarch with some younger females in another pasture as he was not mature. Conquistador was the head bull and knew how to command the herd. At the time I was amazed that Classic, with near 60" horn, was watching Conquistador with about 44" horn breed the cows. When Classic's first crop of calves became public people were surprised that this white bull had so many really pretty speckled and dark colored calves. I made some mouthy comment to Graves and he said neither bull was registered at the time, so it did not make any difference, nor would they ever be. For some reason, Graves had borrowed Conquistador from Dode Partlow. The bull Pecos was born from that year's breedings.

Some months later Pauline Russell recalled Conquistador when I was interviewing her for a history of the Butler cattle. She remembered him well. The story goes, an epidemic of black leg had broke out all over the area and Milby Butler was losing a lot of cattle. A new black leg vaccine had just come out and Milby was gathering all the herd for shots. Pauline recalled the odd colored Conquistador got out of the holding corral and escaped. They spent a lot of time gathering him and again he escaped. It was the opinion of Butlers and Pauline that his days were numbered and he would soon die, but he did not.

The next time I saw Conquistador he was in the Dode Partlow herd south of Liberty, Texas on March 1, 1979. He had been bred to the Partlow herd for a half dozen years and was breeding his daughters and grand daughters. I bought him with several dozen pretty spotted mostly Butler blood daughters, of course all bred to him. March 10, after all the Texas blood tests were completed for bangs, we shipped the herd to Colorado. I took Conquistador to Rocky Mountain Sire Service and a goodly amount of semen was collected. He was blood typed and AI Certified. From that semen most of his progeny have been born.

Conquistador was used natural service for one year at DCCI and sired about 40 calves, then sold to Haythorn Land and Cattle Company at Arthur, Neb. After Haythorn used him for a few months he did not breed any more cows. I believe he was injured in a bad place that no bull wants an injury. We replaced Conquistador for Haythorns with an equal value bull.

Today many of the really pretty tri-color, odd brown colored Butler family cattle have Conquistador in their ancestry. The close up Conquistador progeny had "frog eyes" and slightly droopy ears. To see the importance of Conquistador's contribution you will find him in the pedigrees of Heavy Hitter, Maximus, Dode's Boy, Colorado Cowboy, Rodeo Max, Cowboy Tuff Chex, Gunman, Sequoia Man, Rio Grande and Tari Graves traces to Conquistador twice.

For more info on the Partlow Cattle and Blacky Graves cattle dealings order from Amazon FILLET OF HORN II. An extended chapter is on both herds.