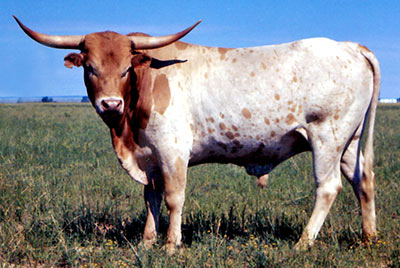 PHILLIPS cattle are one of the oldest of the 7 pure families. The late J.G. "Jack" Phillips, Jr. of Brazoria County, Texas and his father were born and raised with Longhorn cattle in the early 1900s. The herd was expanded in the late twenties by Jack's purchase of the Melgaard herd. A more detailed account of this historical family was featured in the Texas Longhorn Journal Summer 1980 issue entitled the "Texas Ranger Legacy."

Phillips cattle are taller and longer than the other foundation herds. Some interchanging of bulls was done with Graves Peeler and Wichita Refuge in later years. Also a good horned Butler bull was used by the Phillips' during the 1950's to blend with Phillips genetics.

The Phillips cattle were every subtle color with possibly more solid colors than some herds due to the sun burning of white cattle in the very hot coastal climate. More large horned and big beefy bulls were used in this foundation herd than any other. Some of the almost lost Texas twist horn factor was perpetuated in Phillips cattle. The Phillips blood is one unique in itself. They are individualistic and no other herds look exactly like they do. They have long legs and slightly coarse bone. Some almost homely heads and narrow faces may be found which was typical of many early TL cattle.

Texas Ranger, the all-time leading foundation sire, was raised by Phillips. The longest, tallest and most rapid gaining Longhorns all trace to this great bull. At this writing, every world or International All Age Champion Bull traces back to Texas Ranger.

Texas Ranger JP was the first AI Certified bull -- #1. There was great controversy of his genetics due to his early superiority in the breed. He was ruthlessly blood tested by his opponents searching for impurities. One of his 22 blood types of record was also found in Hereford cattle. However history well documents that the Hereford cattle of the USA were bred up from Texas Longhorns. Some historic registered Hereford blood types overlap to Texas Longhorn families. With time and legal struggles it was determined that all cattle breeds share many common blood types.

The Texas Ranger blood is the favorite of leading commercial ranchers and major show winning exhibitors although today it is way back in the pedigrees. This family, when properly mated, would produce adult bulls weighing 1,800 to 2,100 lbs. Texas Ranger is the strongest male line in the breed. More of his down-line progeny are used in frozen semen and embryo transfer than any other line. Some say if it had not been for the growth factor that Texas Ranger added to the breed, commercial ranchers would have never appreciated and respected Longhorns as they do today.

Jack Phillips was well respected in Texas cattle circles and attended major Texas Cattleman's Assn. meetings with a high regard. He served as president of TLBAA for 2 years and was well appreciated. Annual conventions could be right on the edge of a shoot-out and Jack would take the floor and slowly cool the hot-headed loud-mouths down to a conversational tone. Jack loved Texas Longhorns and was excited that his bull Texas Ranger JP had the favor and value to lift the early breed to a higher level.

The Phillips contribution of just one prepotent sire had more authority in shaping the breed than many of the other 7 family whole herds.