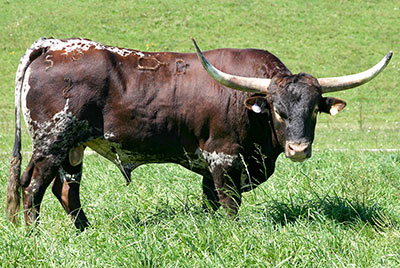 Spartly Friend ~ something over a dozen years ago we raised a dark wine colored bull by Unspartly who was pretty conformation and a rich dark wine color. Back in those days the mid sixties for horn spread was impressive. He was just a young bull and would obviously do someone a lot of good. We offered him for sale on the ranch inventory section and right away a lady, I won't name her, sent the $3500 and purchased him. She was to pick him up right away. Well, that did not happen. Month after month came and went and we were still feeding him. Nothing seemed to move her into action to pick him up.

About 5 months after he was purchased he started to grub his horn in the rocks and then it happened. He removed the 2 or 3 end inches off one horn. I took this photo and sent it to the lady (unnamed) and she was not pleased. She thought I should have put him in a special stall for special care until she took delivery.

These are always tough issues. If the horn spread had taken a growth spurt, and I regretted selling him, it would be my tough luck. Yet if he grubbed of a horn tip then that became my fault. I was responsible for the down side but no gain for the up side. Realizing the bulls horn tip would not effect his calve's horns was not good enough for her. When I offered to throw in free board for nearly half a year that was not good enough. She wanted every penny back -- no compromise. I told her I would put him back on the price list and when he sold she got the money, 100%. It took about a month to resell him.

I always wondered why she had turned so cold so fast and would not settle in any way. Then, when talking to some neighbors who knew her well, they told me. She had decided to have enlargements implanted for the sake of a "special" appearance. She had most of the money saved for the surgery, but needed $3500 more to pay the hospital/doctor. The doctor wouldn't go on credit. The next time I saw her -- yes, there was a noticeable "shape" change. And that is where my bull money went -- right there.