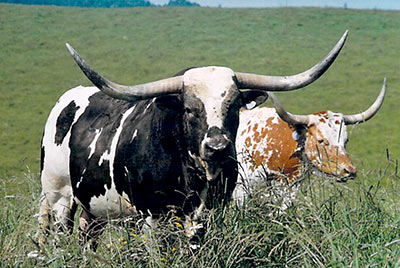 Coal Smoke - He is sired by Senator and out of Impressive Choice by Impressive. He is a full brother to World Champion Senior Cow, Senator's Choice who is the dam of Marshall & Ain't Gunna. His dynamic silver grullo pinto color is one of the most appreciated and unique of the old Spanish colors. He sires the thickest meat type Texas Longhorns. His muscle and huge ton-plus frame makes him a breed leader in the gain trait. His horns measure just over 63." He is the top beef type silver grullo of the industry.

Coal Smoke was born in Colorado and shipped by semi to the DCCI new Ohio ranch during the Summer of 1993. A dear friend of the ranch, Bill Farson, saw him and was impressed by his huge hip and length hooks to pins. Due to Bill's help in the Ohio ranch relocation he was given to him as a gift. Bill used him on his Longhorn and cross bred cows then at about age 4, one day he showed up at the DCCI corrals. Bill had given him back. Semen was collected on Coal Smoke and he was sold to Dean Goodner in Idaho. Jim Steffler because aware of Coal Smokes huge thick conformation so he purchased him and drove to Idaho to pick him up. DCCI bought Coal Smoke from Steffler after he bred him for a few years. He was bred at DCCI for two years and then sold to Ed horn of DeQueen, Arkansas.

Although most of the Coal Smoke daughters are in the mid sixties they are well appreciated for their size and thickness. They are scattered all over the nation from natural service and AI breedings. Watch his You tube at https://www.youtube.com/watch?v=2FCxreK2tT0