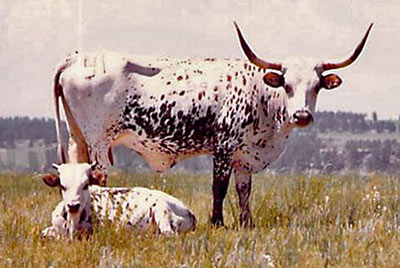 I bought Shenandoah with the Doad Partlow herd of cattle March of 1979. As I was inventorying the herd, sitting on a wood feed bunk, and making an offer, a spotted cow was in labor and walked across a shallow water area and had a calf. Me and Bill Partlow watched as she quickly gave birth. She was about age 3. As the deal was completed we walked away and the calf was up nursing.

A week or so later Shenandoah and son arrived at the ranch in Colorado. Upon arrival Bob Shultz was there and bought this pair. This photo was taken when the bull calf was about a month old at Prairie Canyon Ranch. He grew fast and Bob decided he was herd sire material. He named him Colorado Cowboy.

In a few years Colorado Cowboy got big and grew a lot of horn, especially for those times.

In Texas a young Larry P Smith II was working for J. B. Hunn doing a lot of AI work. A neighbor Rex Glendenning had purchased a cow and ask Larry what would be a good bull to AI her to? The cow was Inez Of Acampo a Wright Bow & Arrow cow. Larry, who now many years later is ranch manager for Rex, AI bred the cow to Colorado Cowboy and GF G-Man was the result.

Colorado Cowboy was never profitable to me as a sire, but I purchased 100 straws of semen from G-Man and by AI raised Gun Man. Gun Man sired Grand Slam, then came along Rio Grande and the Texas Longhorn world is a different place as a result.

Thanks for the people who are thinking, planning and dreaming of breed improvement. It is not fast, but can happen with a good plan. For the full story of the purchase of a full semi load of the Partlow cattle including the famous Butler bull Conquistador, order the eBook, "Fillet of Horn II" from Amazon. It also has the never before told story of the Johnny Cash Longhorn herd. Darol