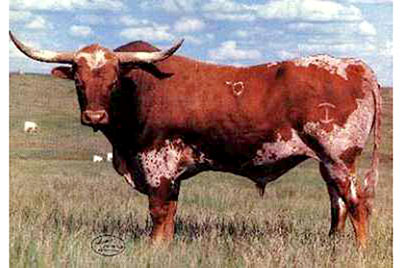 Cowcatcher was a son of Texas Toro out of Calico Gal. He was 3/4 Phillips breeding and 1/4 WR. I bought Calico Gal from Jack Phillips when I got Texas Ranger. In 1972 I sold Texas Toro, his dam WR 1071 and Calico Gal to Dick Mott of Paonia, CO. Cowcatcher was bred by Dick Mott. T. D. Kelsey bought the Mott herd a few years later and Cowcatcher was a nursing calf. I was needing bulls and agreed to buy a bunch of commercial TL bull calves from Kelsey for about $600. I didn't have the cash at the time. I liked Cowcatcher but he had a lot of skin and I did not regard him as a registered sire prospect -- a lot of skin. Kelsey's neighbor John Brittingham bought Cowcatcher, fed him well and he really developed tall, long and eventually weighed over a ton. Only a few TL bulls were that big back then.

When Cowcatcher was about 4 years old John consigned him to the Denver TL sale. I couldn't believe how he had filled up his skin, grew horn and was a great beef animal. I bid on him, but let Richard and Louann Crist of Scott City, KS buy him for $4500. Cowcatcher later became the top bull of the early eighties. Crists collected semen on him and we used him in embryo to produce Overwhelmer and Bail Jumper, and a lot of other really great cattle. He is in the pedigree of Rio Grande, Rodeo Max, Drag Iron, Cowboy Tuff Chex, Jamakizm, and many of the thicker cattle. Semen is still available from DCCI at $10. He died of a ripe old age and Christs buried him intact with skull. I really admired Cowcatcher but never got to own him. He had a great disposition.