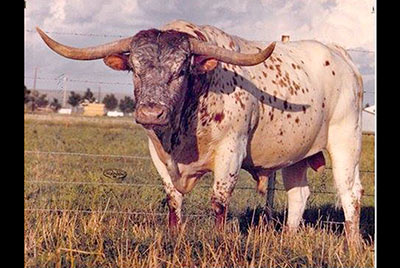 CT Commander -- was a 1976 son of Lone Ranger 55 who was by Texas Ranger and out of YO Linda. His dam was Miss Helen 51 an all WR cow I bought from Kenneth Archer. In 1976 the most advertised bull was Hondo, who was said to be the widest horned bull in history at 52." I sold Miss Helen to Carl Thompson of Hugo, Colorado and she gave birth to Commander. I had heard he was an impressive big bull with very low set horns. In the seventies many bulls had high horns so a low horned bull was special. Before I got in gear Carl sold Commander to Benny Gibbs of Kit Carson, Colorado. Benny had a big sand hills ranch with lots of sage brush and needed TL bulls for his Hereford heifers -- in fact he had about a half dozen TL bulls. I talked to Benny about this bull and he assured me he was over 52" T2T -- I was excited. That meant I had bred the biggest horned bull in the breed, but I didn't own him. It took some time. Finally I got him bought.

Benny told a story about Commander getting "dog piled" by a half dozen horned Hereford bulls and said they really worked him over. Supposedly he laid around for a month or so then completely heeled up.

As quick as possible I hauled him to Rocky Mountain Sire Service, got all the health testing done and sure enough he was fertile as a snake bite. I was starting to advertise this largest horned bull and semen sales were good. He was about an inch over Hondo. With great confidence I collected over 2000 straws of semen. Before the bull was ever back to the ranch we were AI'ing cows and even doing embryo transfers with the semen. He was flushed to the dam of Doherty 698 and several breed leading cows.

It is a good thing to collect a valuable bull before breeding so if he is injured his DNA is secure. When he was through collecting I put him out to breed the best set of TL cows ever assembled at that time. I watched as several cows were cycling. After 3 weeks I noticed all the exact same cows were cycling again and again. With hours of watching, it was heart breaking that apparently he was not able to function. I called Benny and again he indicated he took a real "bull whooping" and might have injured his back. Yet, I knew he had collected semen of very high quality. I called the RMSS and ask about his mounting ability and they indicated he had not ever mounted for collection he had been electro-collected.

That is the sad story of another big one that got away. Although there were a few dozen calves by him, he never personally bred a single registered TL cow in his life. My dream bull just rode off into the sunset. The cow Ranger's Star, a full sister to Texas Star was flushed to Commander and Starlight 152 was born by embryo transfer. She is the dam of Starlight Celebration, the dam of famous clone cow Starlight owned by Dr. Zech Dameron III.