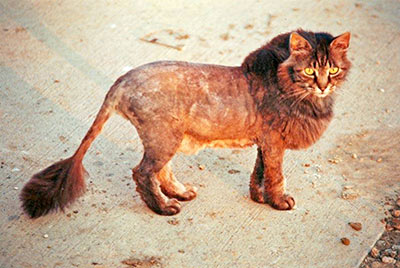 The Summer of Buster the ranch cat --Several years ago, here at Dickinson Cattle Company, in the Appalachian foot hills of Barnesville, Ohio, there was a rodent problem. Mice migrated to the barns where corn was stored. Mice ate holes in the soy bean sacks, reproduced, nested in the barn walls and ran across the shop floor scaring the lady government inspector. We bought poison. They ate some, but liked the corn better. More poison. Finally we remembered a very old fashioned method ---- cats. Every person who wanted to give the ranch a pussy cat, pregnant or not, we took it. We took dedicated tom cats, "it" cats, all kinds of cats. They were fed just enough good cat feed to hang around the ranch. We quit buying poison from Farm Supply. Within a few months all the rodents are gone. We see a rat tail here and there, or a foot.

Cats totally violate the animal rights of rodents. Cats catch them, wound them, let them almost get away and catch them again. Finally if a rodent has no more "sport" he is just consumed and turns into a high protein cat food -- a favorite flavor of ranch barn cats.

Animal rights people have selected certain animals that they grant special rights. Horses, dogs, cats, and certain birds that live in barns or houses have been given rights. All animals or fish who poop in houses have special rights. Rodeo bulls, buzzards, coyotes, rabid skunks, turtles and current serving politicians are Ok to whack them around. Some select animals have rights, some don't.

Buster is a part cat and part wild lion. He was born all cat, then he received a close special "lion clip" making him appear like a small vicious lion. Buster was a sleepy gray cat that no one paid any attention to. He ate his fair share of mice, but was given no special attention until the cowboys here at the ranch caught Buster and clipped him, leaving a lion tail, legs, front end and a clean body clip.

Buster refused to comply with the clipping process. He was particularly violent when the clipper blades loudly removed the hair under his tail. Buster was clawing and howling for help, while the other cats ran out of the barn in fear. The noise of the clippers made him fear for the worst.

When Buster was fully clipped, he ran and hid for shame. When he came out everyone was friendly and wanted to pet him. Never had Buster had this many new friends. When sales people came to the ranch to sell marijuana seed and used wheel barrows, Buster greeted them. Everyone loved Buster. He was the most enjoyed animal on the ranch. It was all about his hair do.

If you have a shaggy haired farm cat or dog, help them be a popular pet for the whole summer. Never will your dog chase away as many UPS guys and have so much fun. Give animals the rights they deserve to scare the kazoo out of every farm visitor.

And Buster lived happily ever after.