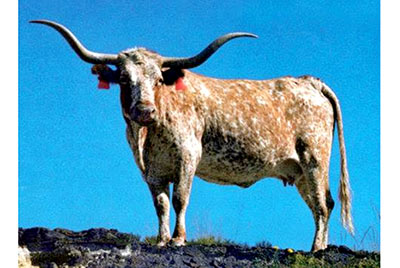 MEASLES 2849 ~~ In fall of 1971 a white heifer with red ears and jaws sold in the WR sale for $170. The WR did not like white cattle; white was a reason to cull. Each year I would buy one heifer for each of our kids at the WR sale. Chad got Measles and the other WR heifers just rode into the sunset. Today, 43 years later, Chad still has cattle that trace back to Measles.

Measles, although white, started to get single red roan hairs her yearling summer. By her second year she shed off with larger roan specks and soon broke out with flashy specks all over. Her measling factor is as strong as the black of Don Quixote. If a critter goes back to Measles more than likely they will measle-up in white areas as they mature. To the opposite, some 15 year old cattle have large white areas of color with no specks. If measling is in the blood, it is a value trait. Everyone should breed for it.

Part of raising great cattle is to be able to turn down the highest offer. When Charlie Schreiner III saw Measles as a 3 year old he offered $1000 for her. T.D. Terry Kelsey offered a new dually truck for her which at that time was worth about $6500. As leading producers wanted to buy her see was retained by the Dickinson family and produced Cheetah, Texas Measles, Ranger's Measles, Texas Ranger Jr., Old Measles, Mr. Measles, all natural service or AI. By embryo she produced Tri W Delivery's Measles, Fantasy, and Rural Measles.

She was the youngest cow to grow over 50" T2T, she won every show entered and drew great appreciation to the Texas Longhorn breed. She was highly appreciated for her very correct conformation, trim type, perfect udder and drop dead color.

After producing a goodly set of genetics for DCCI, she was consigned to the Denver National Western sale in 1979. It was not that we wanted to throw her away, but we wanted to show the nation what a really great TL cow would bring. She was purchased by Montgomery, McCassland and Moore, a partnership, for $17,000, a record for any TL in history. Johnny Hoffman was the contending bidder.

Spring of 1979 Measles produced Measles Super Ranger who was her best siring son. Knowing it was a mistake to sell Measles I bought a half interest in MSR and bred him several years. For the partnership she was flushed at the DCCI embryo center and produced more breed leading progeny of that day, a lifetime total of 23.

When Jack Montgomery dispersed, Measles was purchased by Red McCombs and H. C. Carter for reportedly $200,000, still the highest price of any TL.