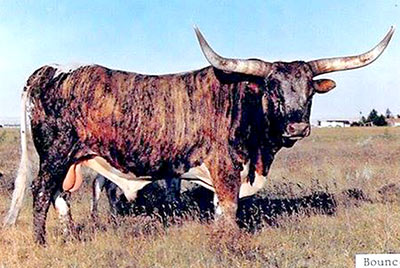 BOUNCER - On 8-6-1982 at Franktown, Colorado a bull was born at Prairie Canyon Ranch owned by Bob Shultz. A strong strike was against this calf from the start. To be born in August and go into the cold Colorado winter as one of the smallest, youngest calves was almost a sure thing to be a steer, or at best be a dogie. Somehow, the youngest, smallest made it up the chain and a couple years later an impressive bull was the result.

Bob was a dear friend and loved Texas Longhorns. I sold him his first cattle in the mid seventies and over the years he owned all or part of Bold Ruler, Canyon Kid, Bouncer, Colorado Cowboy, Zorro Ranger and some unbelievable steers. Once I went to see Bob in the dead of winter. He had a beautiful ranch and put up all his own Alfalfa hay in little squares. He had a stack about 16 feet wide and a hundred feet long. As I got closer I could see about every 5 feet on the sides of the hay stack the cattle were eating their way into the center of the stack. The cattle had broke into the hay stack-lot and made themselves at home. The cows had ate their way into the center of the stack and all you could see around the stack was their tail ends sticking out of the hay. It was an interesting method of feeding hay in the winter. Bob said it worked okay, by spring the hay would be gone, he would go out and roll up the baling wire, and the cattle did fine.

Bouncer had a lacy face which traced down a line through his dam Show Girl II back to WR 2522 a son of WR 1918. For many years I thought 1918 was the source of all lacy faces, but other sources developed later.

Shultz started breeding Bouncer and soon he sported the most horn of Bob's herd. Bouncer started siring smoky colored cows, mossy brindles, speckled hard to describe colors. Bob went to the Colorado shows and won a lot of Championships with Bouncer progeny. The steers by Bouncer were the largest base circumferences of any steers ever seen in the breed. Their horn bases were so large some judges refused to place them because they were "untypical." El Cid and Hopalong Chastity were two who won numerous shows. Bouncer was the first early bull to sire huge horn base and also strong brindles.

I tried to buy Bouncer from Bob, but he was very high. When he was about 8 years old we were surprised that Bob sold him, reportedly for $40,000. He went to a producer in the mid-west. As time went by I called the Bouncer owner and he said he would sell Bouncer. He didn't need him any more. I sent a truck to get him and he was in a small horse stall and appeared to not have been out of it for a long time. His toes were long and curled up from non use. From his hair line to the toe tip was about 10 inches. When he arrived at the Colorado ranch we laid him down and snipped off about 4" of his toes. He was still unsound. In a month or so we laid him down and trimmed him another 4". It took 3 serious trimmings to get him to painlessly travel the pastures.

Semen was collected. Bouncer was used at DCCI, then sold to WWF World Champion Andre The Giant. During the nineties there were a lot of Bouncer progeny, many strikingly beautiful colored. Today he is remembered in the pedigrees of Super Bowl (out of Bouncer Blend by Bouncer) and Win Win. He has of record 152 registered progeny. He is also found in pedigrees of Clear Point, Superb, Bounce N Lyn, Nostalgia, Titan, Duty Bound, My My My and Clear Win.