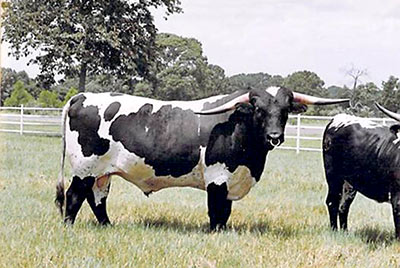 Circle K Donovan - In 1989 Dickinson Cattle Co sold the cow Signal who was a daughter of Don Abraham out of Right Turn by Impressive, out of Ghost, to Ralph Schlatter of Defiance, Ohio. She was bred to Senator and had a huge thick black spotted son. W. O. Marquess found out about the calf and went to Ohio buying the calf and Signal. (At the time he owned a half interest in Senator.)

He named him Circle K Donovan. Check out the www.arrowheadcattlecompany.com site and he is dotted all over wherever big horned black cattle appear. He sired Night Chex who sired the great Bob Loomis cow Night Safari. Donovan is great grand son of the only great source of pure black in the TL industry, Don Quixote.