Two years after Over Kill was born, his dam gave birth to Tempter, who today, is the fifth widest horned living bull --  84.25" T2T. 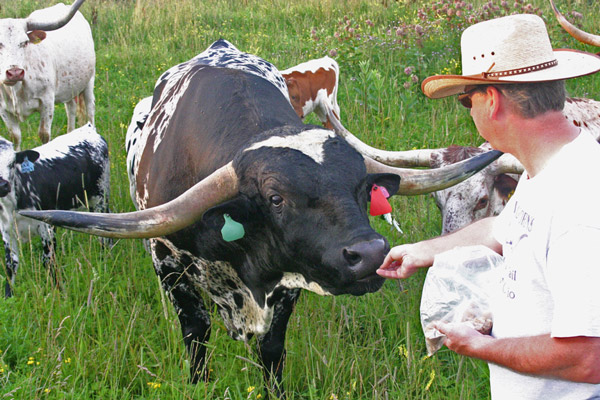 Famous black Texas Longhorn bull, Over Kill, recently passed away at Dickinson Cattle Co, LLC, Barnesville, Ohio. His early demise was a result of an occupational injury incurred during pasture service duty.  Remaining semen inventories from Over Kill are valued at $50 per straw which is 4 times the price of pure gold.

Many of Over Kill's sons were selected for herd sires.  Over Kill has progeny from frozen embryos in several European countries and Australia.  His daughters have won multiple shows in the USA.  His son Smoke's Aces was the All Age International Champion Bull in 2009. Over Kill has sired many World Champions, mostly splashy black and white spotted.

Over Kill developed to a maximum weight of  2100 pounds, and measured 80" T2T at the time of his passing.  His 80" spread was the widest of any black color base bull in the breed.

Over Kill semen sells for $50 per straw. He has never been priced by his owner Joel Dickinson, sold at auction, or offered for sale.

During the last days of the 2010 breeding season Over Kill suffered copulation malfunction and spinal injury with serious damage to his equilibrium. He has been tested by the top veterinarians in the nation and has been x-rayed from head to tail at the Ohio State Veterinarian College. Special consultations have been provided by famous bucking bull chiropractor, Dr. Lewayne Hames of Tyler, Texas.

During his final months Over Kill had difficulty getting up from a resting position. He was cared for in the best and most comfortable way at DCC for as long as possible.  During this time he was available for viewing by his abundant friends. As many as 500 people a day paid their respects to the aging sire during public ranch bus tours.

In memory of his life of dedication to DCC genetics a special grave stone will forever note his contribution. Calves reproduced by frozen semen will cause his legacy to increase for years to come. The stone is being carved "OVER KILL   2003 - 2014,   "... all his seed brought he with him." Genesis 46:7

Over Kill spent his life in faithful service at Dickinson Cattle Company, LLC, of Barnesville, Ohio. The only time he left the ranch was for contribution of semen collections. DCC is a family ranching interest specializing in quality Texas Longhorns, Buelingo and Watusi registered cattle.

With a great sire like Over Kill -- it was better to have loved and lost, than never to have loved at all. His large positive hoof print will be valued in the Texas Longhorn industry for generations to come.

Caption: Famous black Texas Longhorn bull, Over Kill, recently passed away at Dickinson Cattle Co, LLC, Barnesville, Ohio. His early demise was a result of an occupational injury incurred during pasture service duty.  Remaining semen inventories from Over Kill are valued at $50 per straw which is 4 times the price of pure gold.