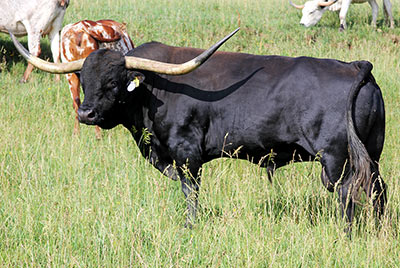 Jet Black Chex arrived at Dickinson Cattle Co., LLC, June 18th via Joe & River Dowling Transport. He received entry vaccinations, was measured and given an adjustment period. The 3 minute adjustment period involved taking him to his pasture of over 70 waiting friendships. His "getting acquainted" period included smelling "hub-caps" up and down the Appalachian foot hills. Within 10 minutes he was in charge and acting like he was raised at DCC.

Jet Black Chex is the widest horned all black bull in the TL industry. He is by Rio Grande and out of the famous Loomis cow, Midnight Darling.

Jet Black Chex was purchased for DCC by Joe Dowling of Elite Bulls, from Justin Hanson of California.

Before the purchase, Justin was asked for an exact T2T horn measurement. (When purchasing a valuable bull, honesty and accuracy are very big.) Justin attested Jet Black Chex was 78.5" T2T. for a 100% black bull, that is an excellent measurement. In appreciation of Justin, let it be known that Jet Black Chex today is 78.75" T2T. Thank you Justin for your honesty.

Summer of 2015 see Jet Black Chex in the Colorado pasture with a select group of test matings.

The Jet Black Chex female herd will be heavy with Clear Win, Drag Iron, Over Kill, and Winchester daughters.

Jet Black Chex is a smooth, pretty headed bull with a straight back and trim correct conformation. You will see more photos soon.

Semen is available now for $35 and it will be available in several countries including the USA.

You will love him!