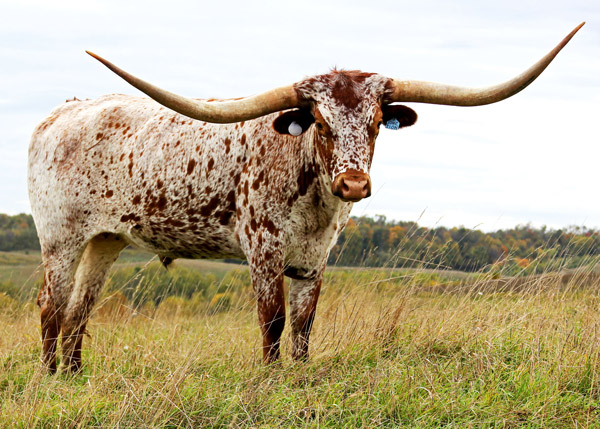 Junction attended his first show at Wooster, OH and was Grand Champion at the regional Ohio River Valley Texas Longhorn Assn show. June Cohron, DVM, was the official ITLA judge. After this show his accumulation of points in the national show system were tabulated and he became the Honor Roll Legacy High Point of 2014.

Junction was born on Dickinson Cattle Co of Barnesville, OH on July 3, 2010. He is sired by Juma and out of Unction by Over Kill.

Texas Longhorn exhibition steers are judged for their show appearance which includes all types of attractiveness as pasture decor. This includes flashy color patterns, correct and sound conformation, gentle nature, freedom of movement and the more horn span the better. Junction measures 87.63" during his 4th year, which projects to an above 100" mature tip to tip actual measurement.

Junction was exhibited by Dickinson Cattle Co, Barnesville, OH and is one of 150 steers being developed on this hilly Appalachian ranch for tourist enjoyment. The ranch sells registered cattle, all natural grass fed beef and offers tours to the public May through October. Many in 2015 will meet Junction in person and hand feed this Honor Roll National Champion Steer.

Caption: "Junction" earned the Honor Roll Legacy award in the International Texas Longhorn Assn for the 2014 Grand Champion Texas Longhorn Steer. He is owned and exhibited by Dickinson Cattle Co, of Barnesville, Ohio. Junction has over 87" horns tip to tip, stands taller than most saddle horses and eats cow candy right from your hand. He may be seen during Longhorn Head to Tail Tours of Dickinson Cattle Co during summer months.