NCBA is the cattlemen's worst nightmare

Greetings!
OCM is providing this service as a method of sending you update information in a timely manner. Please support OCM's efforts to advocate for fair, transparent and competitive markets by helping us grow our newsletter email list! 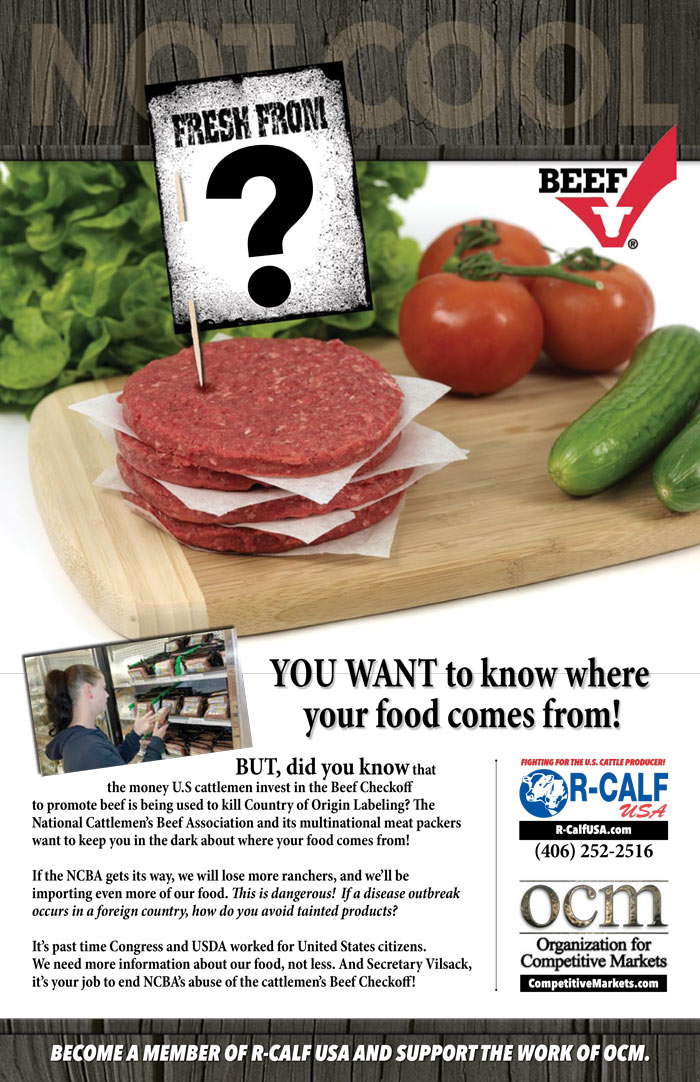 Assumed by its name to be an advocate for the cattle industry, the NCBA is actually the independent cattlemen's worst nightmare.

With its control of the Beef Checkoff Program, the NCBA is: 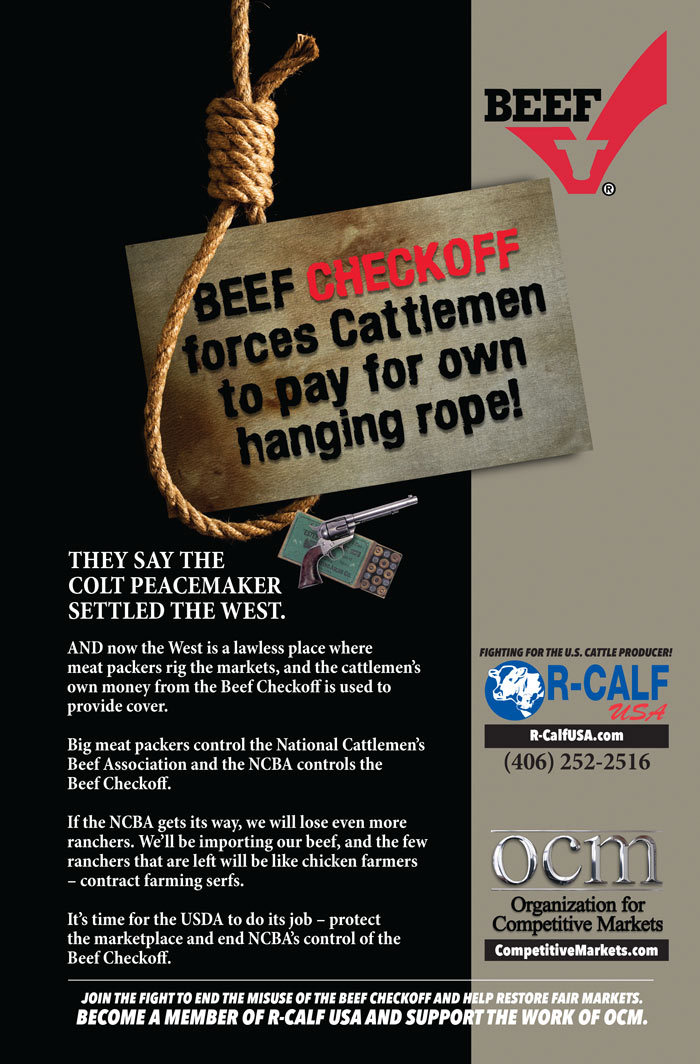 Washington, D.C. - In a graphic issued today, R-CALF USA and the Organization for Competitive Markets (OCM) criticize Agriculture Secretary Tom Vilsack for not doing his job to end the abuses to the national Beef Checkoff Program (Beef Checkoff) perpetrated by the National Cattlemen's Beef Association (NCBA).

The NCBA receives over 80 percent of its funding from the Beef Checkoff and was forced to reimburse the producer-paid program after a 2010 independent compliance review found that over $216,000 in producer contributions had been misappropriated.

In their report, the compliance reviewers stated that their findings indicate that NCBA breached the firewall that was supposedly protecting producer-contributions from being used for unlawful purposes.

The use of Beef Checkoff funds in any manner to influence governmental action or policy is unlawful under the program. Yet, according to R-CALF USA CEO Bill Bullard and OCM President Mike Callicrate, Vilsack refused to take any enforcement action against the NCBA for its misuse of producer funds.

Instead, the NCBA was authorized by Vilsack to continue receiving nearly $40 million in Beef Checkoff funds each year and in 2013 the government-funded NCBA joined with meatpackers to attack the United States' country of origin labeling (COOL) law in a federal lawsuit and is now actively lobbying Congress to drastically weaken if not repeal COOL.

"This epitomizes domestic corruption," Bullard said adding, "The peoples' Congress passed COOL and now a federal agency is funding an organization that has a singular mission to destroy what the people have achieved."

"The Secretary made overtures suggesting he wanted to reform the Beef Checkoff but he hastily retreated at the first sign of resistance - which came in the form of obscure, non-binding report language in a recent appropriations bill," said Callicrate.

"The National Cattlemen's Beef Association and its multinational meat packers want to keep you in the dark about where your food comes from," the graphic states.

The graphic warns that if the NCBA is not stopped the U.S. will lose more ranchers and the amount of food imported into the U.S. will increase.

"And Secretary Vilsack, it's your job to end NCBA's abuse of the cattlemen's Beef Checkoff," the graphic concludes.
# # #

R-CALF USA (Ranchers-Cattlemen Action Legal Fund, United Stockgrowers of America) is the largest producer-only cattle trade association in the United States. It is a national, nonprofit organization dedicated to ensuring the continued profitability and viability of the U.S. cattle industry. For more information, visit www.r-calfusa.com or, call 406-252-2516.

Click here for the real history, download the poster and share!
The Organization for Competitive Markets is a national, non-profit public policy research organization headquartered in Lincoln, Nebraska. OCM believes we must work together, across all commodities, toward the common purpose of returning its food and agricultural sector to true supply-demand based competition. Competitive markets in agriculture is our goal, giving rise to the organization's name. This concern transcends to the international level as international trade agreements threaten our national sovereignty while increasing the market power of global agri-businesses.
Sincerely,