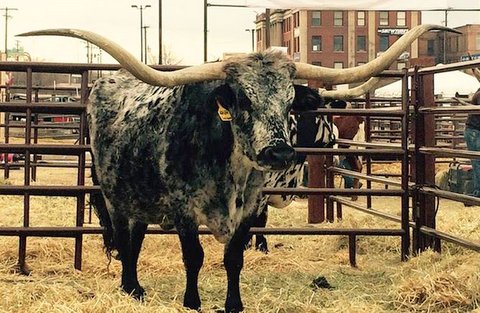 Shadow Jubilee -- January 24, 2015, won All Age Grand Champion Texas Longhorn Female at the 109th annual National Western Stock Show in Denver. This is the first time an over 90" T2T cow has been entered in national judged competition.

The 2015 NWSS was co-sponsored by the TLBAA and ITLA through the local affiliates Rocky Mountain Texas Longhorn Assn and the Mountains and Plains Texas Longhorn Assn. The show was held at the NWSS facility in the Denver Stock Yards where thousands of cattle have gone nose to nose the previous few days.

Shadow Jubilee was judged by Lizz Huntzberry of Smithburg, MD. Lizz is an ITLA approved judge and also a judge training instructor. Her text book style judging was a special touch of professionalism for the NWSS. Her careful detail in presentation of reasons was appreciated by all. It was obvious she personally was fond of the breed being a very successful competitor with Texas Longhorns for many years.

Shadow Jubilee was exhibited by Rocky Mountain Longhorns, owner Tom Matott of Castle Rock, CO. Matott explained, "She is nearing 15 years old, but we wanted people to see her in a judged competition. She is special and the crowd was excited to see her briskly strut around the show arena."

Shadow Jubilee was bred and raised by Dickinson Cattle Co of Barnesville, Ohio. She was sold to James Steffler, Lapeer, MI, and then to Matott. During her career she has never been defeated in horn measuring contests, was voted "Ultimate Cow" at the TLMA Expo, has produced 8 clones, 9 natural calves and 11 embryo calves with 7 more soon to come.

Congratulations to Tom Matott on this major championship achievement.