At Dickinson Cattle Co please allow me to introduce you to "Almond Eyes." She was born April 2013 and is a spaghetti, butter scotch brindle. She has always been one of the faster horn growing young cows. She calved at exactly 24 months, then bred back and calved 12 months later - one heifer and one bull. She is gentle, likeable, great horn spread and an honor for her sire Tibbs to call his daughter.

Almond Eyes has one problem. She is an escape artist. A serious escaper. It is not that she is hungry because there is lots of grass and water, she can eat her heart out on either side of the fence.

Most of the DCC pastures have electric, but over night the deer short out the fences and then it is no longer electric. The men at DCC run the terminals and check for grounds every morning -- nearly. Then deer hit it again crossing the wires.

Almond Eyes and her daughter are pastured with Clear Win less than a quarter mile from I -70 with 100,000 people traveling 70 every 24 hours. It is imperative that she stay put where she is supposed to be.

My Grand Pa had a farm up on a hill one mile east of Burleson, Texas. He showed me a neck yoke he built for one of his wayward cows sometime back about 1954. After he passed my mother got the metal yoke and now I have it. He made it out of metal held together with rivets. It was a ruthless looking thing. It had points forward to catch all the fence wires and points backward to get the cow's attention right at the top of the neck and under the bottom of the neck. It appeared to have a lot of wear and scratches all over it. The cow could lower her head and graze, find a comfortable position to sleep and walked around okay. She was just forced to stay home against her will.

Almond Eyes is now blessed with a "stay home" device somewhat more home-made than my Grand Pa's. Her device is a forked limb with bolts in the top and bottom to catch the wires. It is smooth against her neck, and slides loose around a little as she walks. She has no choice but to grin and bare it. So far about a month has gone by and she is always home with Clear Win where she belongs.

The Almond Eyes' yoke is not without it's problems. Every day or so neighbors and tourists call with helpful concern that one of the DCC cows is caught in part of a tree, which is right. Some say she lifted a tree out of the ground and is carrying it around - which is not true. Every possible concern has been voiced, except that she is growing 2 extra horns up and out the top of her head.

When visiting Dickinson Cattle Co ask to see Almond Eyes. The other cows poke some fun at her but she carries on with the day to day activities, unbothered. Clear Win encourages her. He wants her to stay home with him - she is very pretty.

For all the neighbors of Dickinson Cattle Co, know that all is well. The men work diligently that every critter is safe, healthy and cared for. We also are dead serious that cattle don't take a casual walk down I - 70 to check the fast moving, colorful scenery. 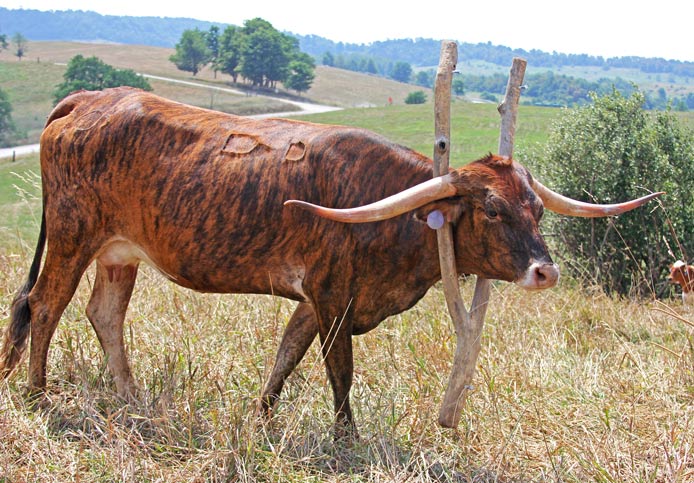