When our family ranched in Colorado, over 25 years, the market for Texas Longhorn bulls was a big one in the vast cattle country of the western states. In the late seventies and early eighties, to sell up to 1000 TL bulls was great, but not unusual. Semi loads of bulls were sent to the Jicarilla Apache in Dulce, NM, large ranches like the McIntosh, Rush Creek, Haythorn and even the Sioux Nation in South Dakota. 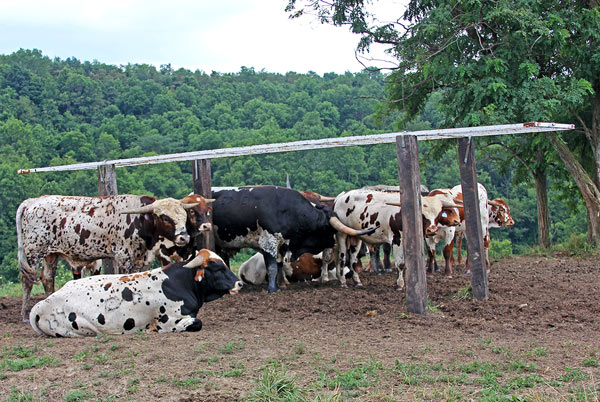 No one gets rich selling easy calving Texas Longhorn bulls, but it certainly is not a business one would run from. If the volume is good, it is a nice thing. Commercial cattlemen have great success with minimum labor during calving season, a high percent of early bred heifers and healthy good weaning cross bred calves.

Sometime after the mid seventies we built a growing corral about 2 acres each -- 4 of them. We developed automatic waters with floats and self feeder tanks so the feed mill could show up with trucks loaded with high roughage feed mixes and auger them full every week. Each corral would have up to 200 young bulls. Sometimes they were sorted by price to make it less confusing. It worked good for a rancher to drive up with a trailer, select bulls and be on the road in an hour or so. We had much less government enforcements back them, which made the business comfortable. 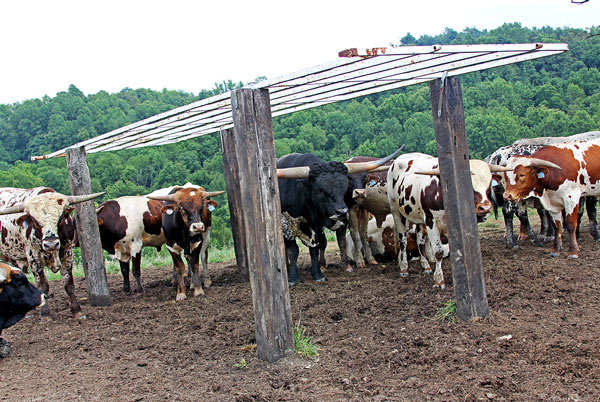 Young bulls will drive you crazy. They butt heads, mount each other, push on the fences, rub on the feeders and generally just wear out everything around, including one another. Not everyone has facilities for bulls nor the temperament to mess with them. It is a lot easier to raise freezer beef.

Young bulls have a two track mind, eating, and as Webster says, "instinctual psychic energy that in psychoanalytic theory is derived from primitive biological urges related to preservation." On this second track, basically the strong Texas Longhorn libido causes the bulls to play rough with one another and at times cripple another bull from excessive mounting. A bull may be sick and lethargic only to become a favorite target practice mount for 200 other bulls in his pen. The results of mounting abuse can within hours cause serious back or hind leg damage to a young bull already under the weather.

Sometimes the victim bull is removed from the mob, but it may be too late and a young bull is already permanently injured. Part of the thing ranchers like about Longhorn bulls is their strong libido urge. The urge to do a lot of business in a short amount of time. This high libido may turn into the problem.

After dealing with this problem on a constant basis the "head-ache-crasher" was placed in bull pens. It can be an old steel panel strapped to railroad ties mounted just above the victim bull's back. We soon found it did not take bulls long to locate the "crasher" when in need. They would get tired of the molestation and head for the crasher. They could lay under it in relaxed comfort. If the aggressor bulls started a mount they knocked their brains up against the crash panel. After a few times, a few head aches, the whole recreation event was more pain that it was worth. As a result, crippled bulls and labor problems to keep bulls from being bulls was minimized. One crasher lasts many years and just keeps on preventing.