Barnesville, OH -- The benefit of Texas Longhorn cattle genetics for the arid hills of Israel was first considered by the Israeli Prime Minister, Ariel Sharon. The Prime Minister traveled to Texas and became mesmerized by his introduction to the historical breed at the King Ranch, Kingsville, TX. He promptly made plans of importing Texas Longhorns to Israel from the day general manager Leonard Stiles toured the herd with the Israeli war hero. 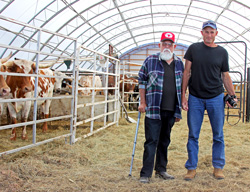 Simon and Erez Cahaner visited Dickinson Cattle Co of Barnesville, Ohio in the Summer of 2016 to evaluate the feasibility of exporting frozen Texas Longhorn embryos to Israel for their 600 cow herd. This is a major introduction of Texas Longhorns to the area.

Ariel Sharon was a key player in Israeli military defense for decades and highly regarded within his country. He was respected for his unstoppable determination to do whatever he deemed best for the sake of Israel's security. Starting at age 14 he served dozens of years in military service. He participated in Israel's War of Independence, the battle of Latrun, the Arab-Israeli War of 1956, the battle of Mitla Pass, the Six-Day War of 1967, the War of Attrition of 1969, and the Yom Kippur War.

A few months after the Prime Minister returned from Texas in 2005, he suffered a stroke. His plan to introduce Texas Longhorns to his West Bank Israeli ranch ended. After 8 years in a coma, Sharon died.

Many years later, Summer of 2016, Erez Cahaner and his dad Katcha "Simon" Cahaner made two trips to Dickinson Cattle Co of Barnesville, Ohio and evaluated the Texas Longhorn herd. Unlike the Sharon plan for importation of live cattle, the Cahaner's plan was to import a good number of frozen Texas Longhorn embryos. The embryos would be placed in their indigenous Israeli cows and full blood Texas Longhorn calves would be the result. 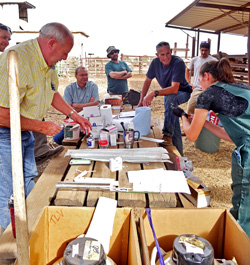 In the northern Gilboa Forest section of Israel, Dr. Em Mowrer (right) of Barnesville,Ohio prepares to implant Texas Longhorn embryos from Dickinson Cattle Co. The 10,000 acre Israeli ranch is managed by Erez Cahaner (dark blue shirt) who came to the USA to purchase new genetics for the arid desert ranch. This is one of the largest cattle operations in the eastern Mediterranean area.

In November Larry Baker, director of the Ohio Livestock and Genetics Export Council, and embryologist Dr. Em Mowrer DVM, accompanied the embryos to the Holy Land. Collections of Texas Longhorn frozen embryos in Ohio was under the careful hand of Nathan Steiner, DVM. International documents and permit assistance was provided by the Ohio-Israel Agricultural Initiative, Dr. Sara Horowitz.

Baker said he was initially curious as to why the Cahaners selected Texas Longhorn embryos, but found that Texas Longhorns are much better suited for the hotter, dryer climate there, as well as protection from predators, such as wolves.

"Longhorns can live on a lot less than English bred cattle." he said. "Once I saw the harsh conditions that the Israeli cattle have to be raised in, I can understand it."

Dr. Mowrer, from a veterinarian's perspective, indicated herd health was an issue. "Tick fever is an Israeli livestock problem, as well as the low quality grazing fiber." Israel is ideal for goats and browsing livestock, yet far more challenging for large scale cattle production.

Ohio is either number one or two in the export of genetic and germ plasma, which is semen or embryos. Wisconsin and Ohio are the two leading export states, mostly due to the long time health status of the in-state herds.

"I feel the success of this export project should be pretty good. The Cahaners had excellent working facilities, and they are serious about raising efficient cattle adapted to the rugged Gilboa environment." reports Dr. Mowrer.