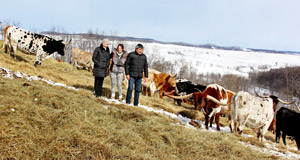 Barnesville - A delegation of ranchers from the Republic of Kazakhstanian made an investment trip to Dickinson Cattle Co to evaluate the Texas Longhorn cattle breed. Due to the rugged landscape of their Republic it was their internet research that led the group to Ohio.

Yerlan Talipov, who runs 1200 mother cows in Kazakhstan, had been reading about Texas Longhorns. Yerlan and his wife Dinara, and interpreter Aikera Marat boarded a plane in their major city Almaty, went to Frankfurt, then Chicago and finally Pittsburgh on the way to Dickinson Cattle Co. Although their arrival was welcomed by some cold weather, they seemed comfortable as it was much like their country.

The Republic of Kazakhstan lies in the north of the central Asian republics and is bounded by Russia in the north, China in the east, Kyrgyzstan and Uzbekistan in the south, and the Caspian Sea and part of Turkmenistan in the west. It has 1,177 miles of coastline on the Caspian Sea. Kazakhstan is about four times the size of Texas. The territory is mostly steppe land with hilly plains and plateaus. Over 70% is grazing land used for cattle, horses, and goats. Their rainfall averages 23" per year.

Modern Kazakhstan was invaded in the 1st-8th centuries by Turkic speaking and Mongol tribes. They were conquered by Russia in the 18th century. They obtained their independence from the collapsing Soviet Union in 1991. At this time they have good relations with Russia and China their largest neighbors. The population is just under 20 million citizens, mostly involved in agriculture. 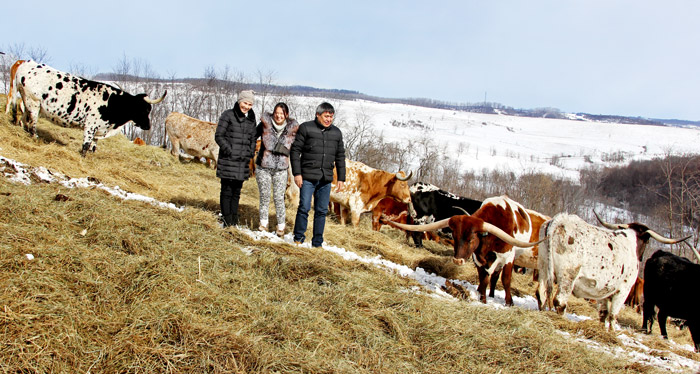