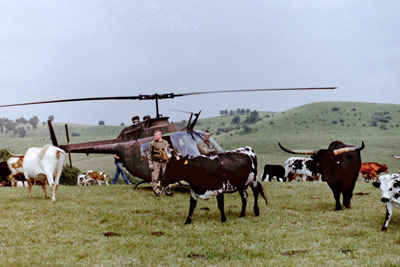 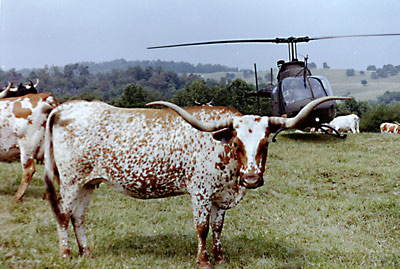 CW4 Nicley had been searching for a large land area where West Virginia National Guard aircraft could land and take off without disturbing local residents. Other large land owners were reluctant due to the liability of a crash/fire event and the possibility of stampeding cattle. 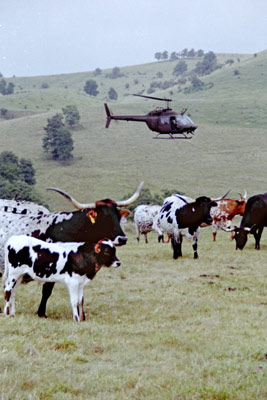 "We didn't know how the Texas Longhorn Cattle would respond to the low flying and loud Black Hawks, so we had to test them." says ranch owner Joel Dickinson. Nicley and Aviator Lt. Matt Hasslock soon arrived to test the reception of the Texas Longhorn cow herds. Helicopters were carefully landed in different cow herds and while landed Dickinsons spread cattle treats around the aircraft. Test landings and take offs were practiced. Within minutes the cows lost interest and went back to eating grass as if nothing had happened. It was obvious the gentle cattle were not disturbed by the loud helicopter blade noise.

Formal military agreements were signed by Dickinson Cattle Co for 15 years and now a new agreement extension up to 2020 has been signed. This is voluntary with no cost to the military. "We are honored to have a unique land area good for professional training of the National Guard." Hundreds of Guardsmen have been trained and served in active duty from these exercises.

National Guard Aviators must train to the same standards as active duty counterparts and conduct 96 flight hours of training annually per crew. This involves low level flight, Pinnacle and Ridge-line operations. The reclaim land at Dickinsons is perfect for this training. Flights will be conducted during both day and night and include the use of night vision goggles, which is the most demanding mode of flight training. All operations will originate at the Ohio County Airport.

When local residents see low flying craft (mostly at night) flight crews are not searching for marijuana, escaped convicts or dealing with emergency problems. They are training to deal with every type of disaster or military project when needed. Current training exercises are under the authority of CW4 Mark Prosser.