Reckon So Wins at Winchester Futurity

DICKINSON CATTLE CO, LLC would like to thank the good folks who made the WINCHESTER FUTURITY OF THE NORTH a great success. It was held June 25th in Princeton, Indiana. This was the 6th annual very successful WFOTN event.

Indiana is becoming a hot-bed of Texas Longhorn activity with the very serious Mid Western ITLA affiliate events and the upcoming ITLA 2016 Championship Show and Convention in late October.

Due to the very busy AI season at Dickinson Cattle Co, (DCC) the ranch was represented by Doug Burris, Jr Herd Manager, and Sarah, at the Futurity. (See photo of Doug and Reckon So below)

DCC was honored with a Henry Mare's Leg Rifle Trophy for Reckon So, the Class 15 Senior Bull victor. Reckon So is a son of Cowboy Tuff Chex out of Dragon Pearl by Drag Iron out of Field of Pearls. He had also won his class in the Bowling Green Winchester Futurity. Reckon So is currently a natural service sire at DCC and semen is available at $50 per straw.

I'll Bug You, a Class #1 heifer also exhibited by DCC won the Mare's Leg Henry Trophy Rifle prize for that division. She is a Top Caliber X Clear Win blend.

Dickinson Cattle Co is located in the Appalachian foot hills of Ohio near Barnesville. Great Texas Longhorns, Dutch Buelingo and African Watusi cattle are raised and available for purchase at 740 758 5050. 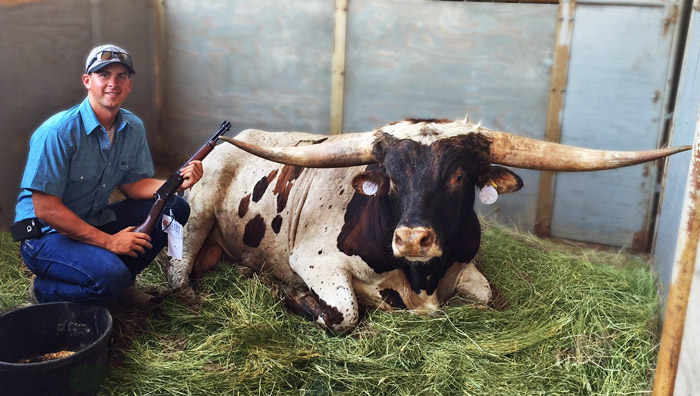