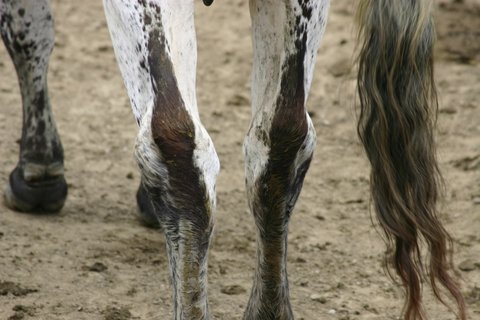 This was a tall bird legged cow. Her dainty bone begin to fail her before she was very old. She stopped breeding. The puffy hocks tell the story that her soundness had gone away. There are no knee or hock replacements for cows.

In 1961 a fancy little cow, later registered at "Beauty," was born on the Milby Butler ranch. I would bet her birth weight would have been 35 to 40 lbs. Under today's standards she would become the foundation of the Miniature Texas Longhorn industry, however she is in more pedigrees of the regular registries and the miniature than any other single cow.

During Beauty's senior years she was enrolled in the Dickinson Cattle Co embryo transfer program in Colorado. She was grain fed, wormed, fluked and given every kindness and nutritional comfort to encourage her to produce in embryo. Although Beauty is believed to be the first Texas Longhorn cow to measure 60" tip to tip, she had a top weight of 525 lbs. In her younger years she could have weighed somewhat more than that, but her frame was slender and her legs dainty, which limited her ability to push a scales down. 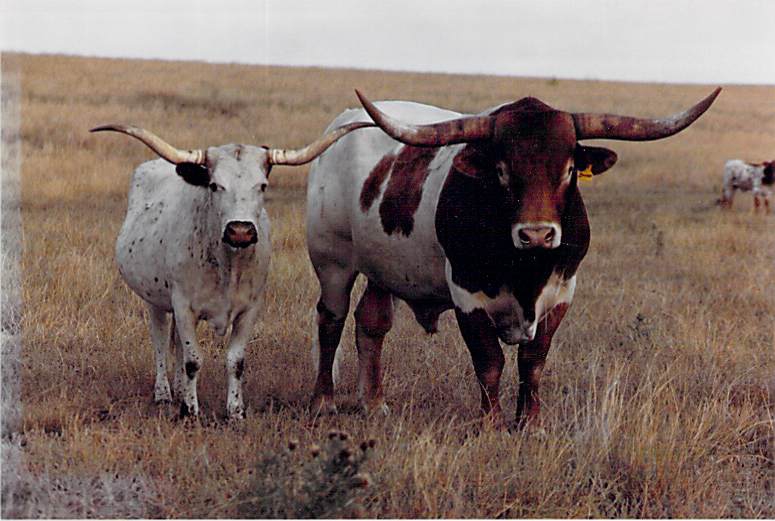 In the eighties certain "sire tools" became available. There were a lot of 600 lb cows that weaned very small calves. They were old traditional type cows with small size and fine bone. Bulls like Zhivago who weighed over a ton could help this cow to produce larger calves and even larger horn at the same time. Zhivago has well above normal breed size and bone. He was successfully bred by Bill and Sue Burton until he died at age 22. He was still sound and breeding his 22nd year.

Go to a draft horse pull or an oxen pulling contest. Look at the size of the feet, the bone and the substance of hocks on these professional pulling animals. You will not find anything of a “jockey” nature. Many people call fine boned animals “bird legged,” similar to a big bird with tiny legs. With strong bone, come some other very good things... the longevity of soundness is one. The ability to lay on thick layers of meat is another. The chicken industry has identified strains of chickens with very large bone and with that, they have developed some gainability factors of the fastest growing efficient fowl in the world. They have developed thick bone and found it very profitable.

There was an old bull in the Longhorn industry about twenty years ago that was well thought of. His owner asked me to evaluate his herd. As I looked closely at this bull, I realized his hocks were very unsound. I asked if the bull was getting all of his cows bred and sure enough, he was not. The bull had very fine bone and yet he was a big heavy bull. As a bull mounts his cows, it is important to have the strength to thrust and complete his task. When a bull is fine boned, with time, something has to wear. This grand old bull became more and more unsound. Although he was completely fertile, his pain while completing his task caused him to end up in one pound packages. 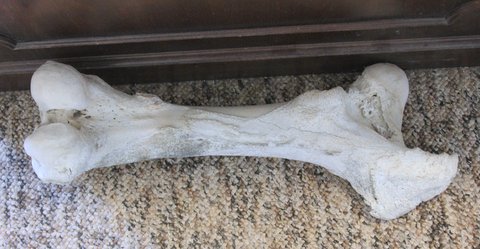 This is the right femur bone of Zhivago after he passed. I proudly display this beautiful strong bone right by my desk. I believe it is the largest, strongest femur ever on any Texas Longhorn. Zhivago, an early improver bull with bone and substance perpetuated this longevity quality through his down line progeny Jamakizm, Clear Point and many others.

Herd sires with good bone and substance will remain sound and have more longevity to utilize their good genetics than the finer boned animals. Every serious breeder should make strong considerations of bone when breeding value cattle.

Strong bone is not as serious with a cow as it is with the bull. A cow does not have to perform the every day duties that a herd sire does. However, a very fine boned cow could prevent herself from being the dam of a great herd sire because she transmitted the “bird legged” factor on to her sons. It behooves people to refrain from multiplying bird legged genetics.

It is important in the Texas Longhorn industry to seek out genetics that produce more strong bone and substance, unless miniature and short longevity cattle are the goal.