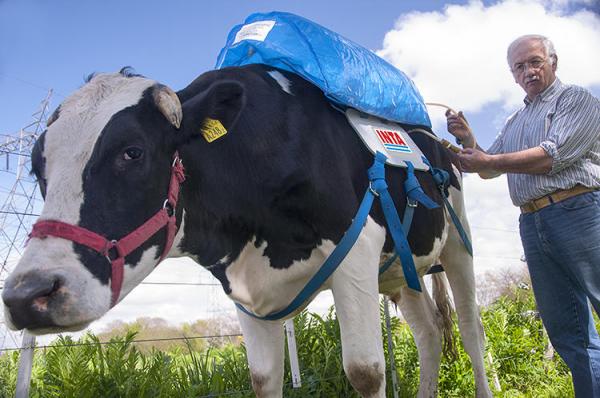 Brown’s move Monday targets a category of gases known as short-lived climate pollutants, which have an outsize effect on global warming despite their relatively short life and minimal percentage in the atmosphere.

Cattle and other farm animals are major sources of methane, a greenhouse gas many times more potent than carbon dioxide as a heat-trapping gas. Methane is released when they burp, pass gas and or defecate - "God bless you!"

“If we can reduce emissions of methane, we can really help to slow global warming,” said Ryan McCarthy, a science adviser for the California Air Resources Board, which is drawing up serious enforcements to implement the new law.

In the nation’s largest milk-producing state, the new law aims to reduce methane emissions from dairies and livestock operations to 40 percent below 2013 levels by 2030, McCarthy said. State officials are developing the regulations, which take effect in 2024.

"We expect that this package - and everything we're doing on climate, does show an effective model forward for others," McCarthy said.

“It just makes it more challenging. We’re continuing to lose dairies. Dairies are going broke daily. Dairies are moving out of state to places where these costs don’t exist,” said Paul Sousa, director of environmental services for Western United Dairymen.

Republicans say the regulations will hurt agricultural businesses . Leading democrats believe a minuscule improvement in air quality is of more value than the business of producing agriculture products.

Enforcements are always costly. In projecting where this political lunacy is going, led by Californians, it is an unending guess. Will it transfer to ranch free-range livestock, the rodeo industry, horses, government wild horses, or even in full enforcement -- people. Those watching the legal actions by California fear where this will lead. Will there be a Methane tax added to agriculture for non compliance? What will the fines be per cow? Will it affect Mexican food restaurants? Californians and "Moonbeam" Brown will be the first to know. All should watch from a safe flatulent distance.

The number of Californian people and businesses fleeing over regulation and high costs reached a record high last year. I doubt the new cow fart law will do anything to reassure people who haven’t yet joined the great Californian exodus. The whole thing stinks, or perhaps doesn't stink as much as the politicians think.