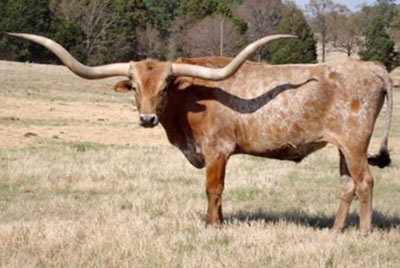 Speckled Field 2015, with age his beautiful wine color faded.
Many years ago, from a far away land, a phone call came to Ohio from Drew Bradford needing a young exhibition Texas Longhorn steer who would grow to be something really special. Here at Dickinson Cattle Co several steers from the 2001 crop were available. Drew purchased a young steer for the ranch registered as Speckled Field. He wanted assurance that this steer would really grow wide horn with a nice twist. At the time of purchase the steer was young, but all the genetics were there.

Soon a trailer rolled into Edom, Texas and a young wine speckled steer stepped down, placing his feet on Texas soil. His home for the rest of his life would be the John Baxter Ranch. His new owner was Joe C. Thompson, Jr, of Dallas, Texas.

Speckled Field was sired by Fielder who also had sired a little heifer one year earlier, years later to be very famous, named Field Of Pearls. Speckled Field's dam was Shadow Most by The Shadow. He had an early start of good flat horn and color of a unique speckulation, very different. 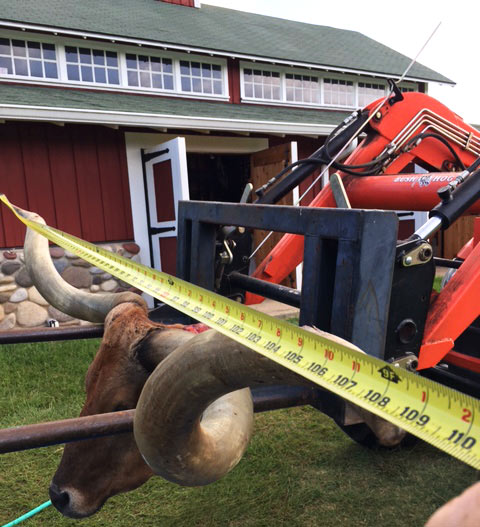 It was a sad turn of events the day Speckled Field passed away at 10:27 AM, June 13, at Edom, just a small way from where his feet first touched Texas soil. Not being surprised, the ranch hands quickly prepared his head and cape for immortalization as a beautiful head mount. On his final day, tip to tip, he measurement just over 109." One of the top taxidermist in Texas has his trophy and will be handling it with the best of professional care.

As a final comment by Drew Bradford, "We'll miss him. He was magnificent. We thought people would like to see his tip to tip."