After Church last Sunday, our family enjoyed lunch with some friends at the famous Mexican restaurant, Taco Bell. (You don't have to wait very long on some tired waitress to take/bring your order. It is a simple purchase at a low price, eat, and out of there. No embarrassing expected/demanded tips for normal service)

As we left, I backed out and there, impossible to miss, was the most visual promo I have ever seen at Cambridge, Ohio. Taco Bell was full of people and only one other bumper sticker in the whole parking lot...... except this one person. At a glance, 2 cars were stopped reading the messages while the truck owner was munching down tacos. The truck owner may be an illegal immigrant, a drug pusher, an ex-convict, an evangelist or a politician, but for sure, he has convictions and is not ashamed to make them known. 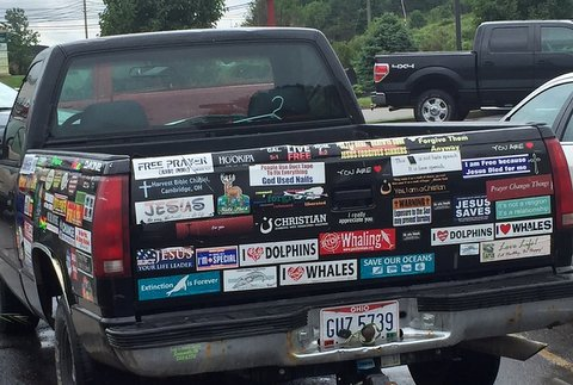 Then there were some stickers about saving dolphins, whales and the ocean. I did not know we were losing the oceans.

What does it mean when people don't or won't have a bumper sticker. Perhaps, they don't have an opinion. Maybe they aren't sure of their opinion. They may not want to defend their beliefs. Some don't want anyone to know they are thinking about things. When you drive around, how many have promo stickers? Perhaps some fear it will offend Muslims, communist, atheists,or pedophiles? Do you have an opinion? Would you be ashamed to drive this truck every day? Can you trust people who hide their opinions? What does it mean when there are no opinions on the most visual billboards available?

Some city people, bless their hearts, spend over an hour a day in stop and go traffic. They will read every bumper sticker in view. Thousands of people, maybe millions will read a promotional bumper sticker before it fades and goes away. Bumper stickers may be the most successful of all methods for the cost of promoting any business or opinion.

Are you always ready to help promote the Texas Longhorn breed, here are 3 new bumper stickers? Send $10 for 12, (4 each) and make a statement! Publish an opinion for what you really believe. Send to LHTT, 35000 Muskrat, Barnesville, OH 43713. Say what you think!!