FAKE NEWS is big talk on many media outlets. Although it is easy to think Fake News is only about Hillary and Donald, it is just as fake in the livestock industry. For most of our lifetime the two leading commercial cattle magazines were Beef and Drovers. These magazines long ago gave up selling subscriptions so, just fill out a bingo card and you will receive it free, if you check the right boxes.

According to USDA, 1000 ranches go out of business every month in the USA. With few exceptions these hard working cattle people exiting the industry read every magazine to get ideas about profit - saving the ranch - saving the family business. But, for them, it did not work.

Read the Drover article below. After you have washed the puke off your face, thinking about projections of every rancher and cattle-friend taking a $22 loss on every calf in 2017, read on..... (click for full article)

There are things missing from the Drover article. There are flawed conclusions. One quoter says, sell smaller cattle - that would put less meat on the market for ranchers - less income. One quoted person says ranchers retained too many replacement females. One says there is too much chicken flying around out there.

None of the college guys noticed that the profit of $518 per calf in 2014 was while COOL was still in existence. COOL, Country Of Origin Labeling was the law of the land. Every package of beef consumed, legally, in the USA had to have a label stating where it came from. Every beef buyer could know, before buying, if their beef came from Mexico, China or the USA. No gratitude to the Obama administration, Dec. 20, 2015, COOL was eliminated by the president's pen. Notice the graph which shows the decline in USA beef values when COOL ended, from $518 to -$22. 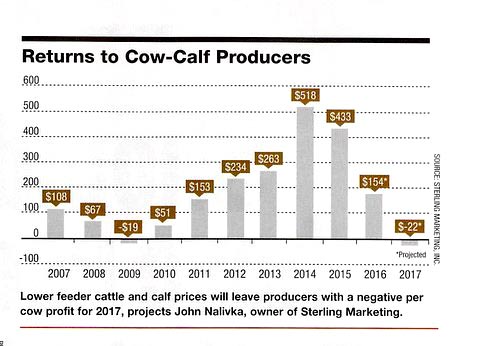 None of the college guys noticed that 18% of the beef consumed in the USA in 2016 was imported - with no COOL label. It is projected, unless COOL is reinstated, 60% of the burgers in the USA this coming year will be imported beef with unknown sanitary conditions. People don't like that!

The college guys think increased imports are the secret to good beef prices. The graph below clearly shows that the USA is a net import nation importing more beef than exporting since back in 1998. Anyone involved in writing this Drover article should have noticed that imports are the problem, not declining numbers of ranchers still out there over producing. Ending protection from COOL has opened the export door to the USA. It just might happen that more ranches will go belly up in the fall of 2017 than any year before. No thanks to you Fake News, and ignorant politicians.

Notice on the USDA graph below the red lines. That is the amount of imported junk meat brought into the USA annually, more than the exported product. No matter how much is exported, more will be imported to make up the consumers need for USA high protein food. How hard is that? 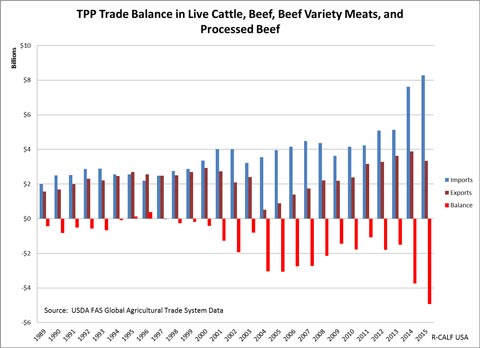 We raise registered Texas Longhorn cattle. I am pleased that the commercial wrecks in generic cattle somewhat bypass the registered industry. Yet, many of our Longhorn friends were envious when neighbors were selling generic calves in 2014 at a $518 profit above costs. That hurt. This year, if Drover projections are correct, the hurt will be much larger. Here are some ideas to duck the bullet: