At DCC we raise and market cattle. There are 3 breeds here. Marketing is something that has been studied by people far wiser than our family clear back to cave man days. Some marketing efforts are really profitable and some just don't work.

Many get discouraged because they try popular types of advertising and get minimal results. There are reasons. Some do a bad job of marketing and then blame it on the breed of cattle they raise.

Some time ago we sold a good size trailer load of cattle to an entry level ranch several states away. Within a month another Texas Longhorn producer, not many miles away, spotted this new producer on Facebook and paid them a visit. During the visit the producer asked our buyer why they bought from Dickinsons and the answer was, "We didn't know anyone around here had Longhorns."

The local established producer had very good cattle, but no visual sign of his business was anywhere in sight. The cattle were not visible from the main road and there were no signs advertising cattle for sale. This is not a new thing. It was easier to buy from DCC than hunt a local producer only 20 miles away.

Although DCC works at marketing in every corner of the nation, local sales are always by far the best. It is so easy for a person 20 miles away to drive to the ranch, load cattle and drive home. No interstate federales to deal with, no hauling costs and it creates new local producers to help promote the breed.

After I was in the big hospital for 8 days, I crippled back to the ranch and was welcomed by over 1,100 emails and nearly a thousand Facebook entries. Some of these were asking why I didn't want to sell them cattle -- what was wrong? It took nearly a week to go through and delete about 95% of them. It is amazing that some people send out a Facebook message, then a second, a third and sometimes a forth duplicate. They must think I am blind as well as crippled. The more duplicates the more it clutters up the system and the quicker people delete stuff from those serial-reputation duplicators. 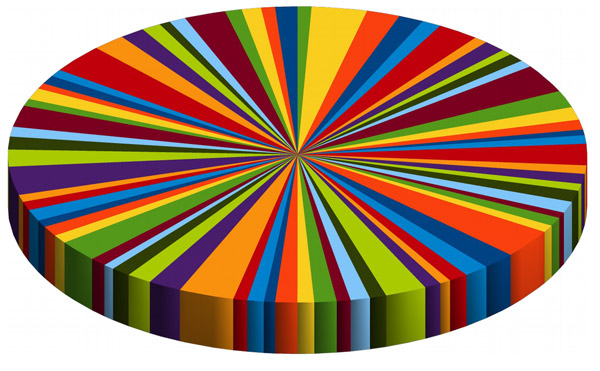 What happens is that the multitude of emails and Facebook dispatches dilute any importance of all information. Everyone wants to receive important information, but when it gets buried with duplicates and debris it becomes a larger pile of deletable clutter.

On any given day I get dozens of eblasts about sales coming up, consignments needed, calves being born, sponsorships needed, buckles needed, more sponsorships needed and of course Canadian drug sales. Years ago I would get twenty a day and look closely at each one. Now it is down to how fast they can be deleted to get to the real information from valid people.

Emails and Facebook is economical. Yet, this multiple cheapness has turned into so many slices of the pie that all are minuscule. Just in the Texas Longhorn industry there may be up to a thousand ranch sites or Facebook accounts all designed to sell cattle. The pie is divided more. Is it any wonder why most have very little response from their internet activity?

This is a problem when conventional sales efforts are divided into microscopic slices all fighting for the buying public. There are many solutions. Here is one.

At DCC we are fans of signs. Without a doubt we believe our signs along the joining highways have, over the years, directed hundreds of clients to the ranch, the tours, and the beef store. We have tested it and it works.

The wonderful thing about signs is that no other Texas Longhorn producer within 50 miles has a road sign. In a 50 mile circle, people who drive this area see the DCC signs. There are thousands of people within this area and many have land, grass and may have cattle. In fact no one has an Angus sign anywhere close -- no Quarter Horse signs -- no Llama signs. If you drive the roads around here you only see our Texas Longhorn signs. If you were to make a pie chart of how DCC shares the pie with other people and their signs, here is a chart. All visibility goes to the only signs erected -- all 100% of it. 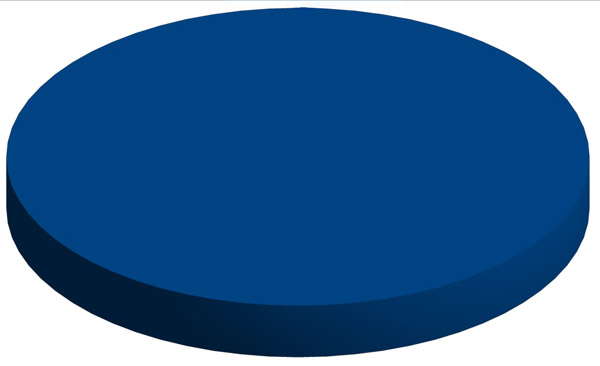 Now to conclude, as our preacher says half way through his sermon. Put up signs along the roads. Don't falsely expect a tiny slice of the internet pie to build your business when you can have all the total pie with colorful local signs. Look closely at the two pie charts. I am telling you the facts. In a few years the slices of pie will be half as big, and then less and less. The electronic promotion will get less and less effective. Don't wait. 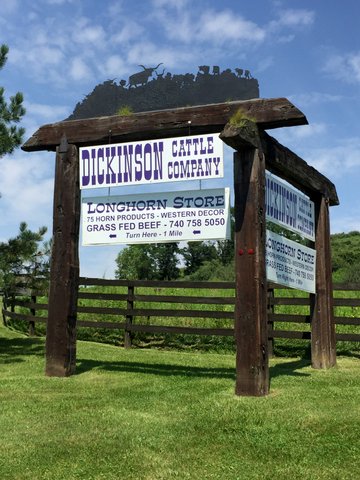 What if 95% of the Facebook and internet bombardments were eliminated and several hundred Texas Longhorn producers determined to put up large cattle signs? What if thousands of people all over the nation could see Texas Longhorn signs every day?

Here is why signs are so good. Most Facebook and internet communication is among the family of people who already own Texas Longhorns. It is the same people singing in the same choir every day. The people driving the highways are living outside the Longhorn sack. They don't get promo emails every few minutes. These are new prospects in the big world out there that need to be thinking about buying their first Texas Longhorns. This is the real target -- the big target. This is a FACT!!