PHOTO SEASON - To everything there is a season

Here at Dickinson Cattle Co, in Ohio, cattle are starting to slick off winter hair. Little by little a bright shiny hair coat is popping out. There is a time when their colors are the brightest, most attractive and most perfect for photos.

Whether it is ads, sale catalogs or internet, many great cattle live their life and never have a real good photo taken. There are a lot of reasons -- mostly just an energy problem on the part of the camera owner.

I take photos from a Ranger Crew, due to my 3 hip reconstruction surgeries, the Crew works pretty good to get me in the right position, right light and all over the ranch. In years gone by I ran around the pastures, jumped, danced, dropped to my knee, or on my stomach -- whatever it took, for the right angle. I have a little 14" by 10" laundry basket strapped in the front seat to hold my camera and whatever inventory print-outs, or price sheets needed when in the pasture.

To have a good result I need a helper with the pose and ears. My daughter Dela is perfect for moving a critter into position. Sometimes my grand kids are confiscated into assistance, or Linda, my wife. I took a corner a little fast last year and rolled Linda out on the ground and my "trust-factor" is less with her than years ago. I am not saying she was negligent, and not hanging on properly, but I did get full blame for the highly "verbalized" event. 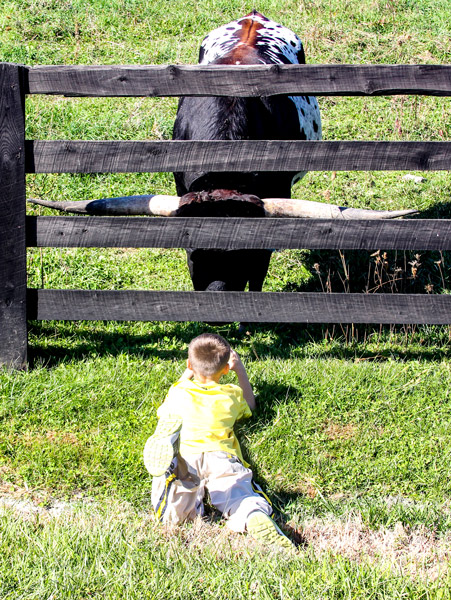 This is a tender subject: Guests to the ranch often like to take photos. When I am personally touring a special guest around the ranch they normally ask if they can take photos. That is polite. I always okay the request, but with stipulations. I make people promise not to use their photos in any publication. After I spend hours trying to get a really great photo with good light and pose, I do not want a flawed photo with a horrible pose to show up tomorrow on Facebook. The public image of a great bull is valuable. A sincere photo-snapper can destroy a bull with a crooked stance, a bad camera angle, or any number of photo errors. I really wish people did not take photos of our most famous bulls -- it can be touchy! 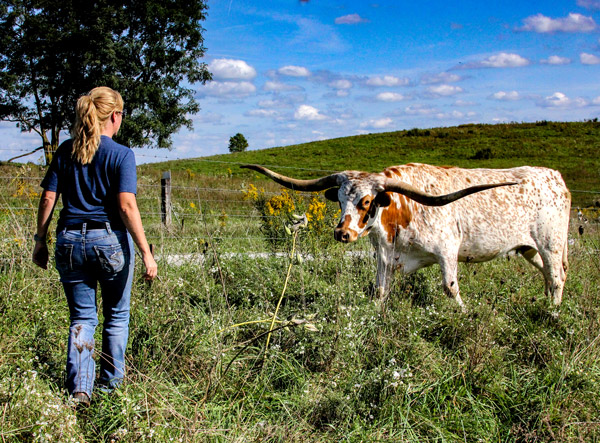 Here is a trick we do. When a cow like Silent Iron, who just passed the 100" tip to tip mark, is almost posed, but isn't quite as good as other photos taken in the past. One of my good helpers slowly walks out of the Ranger Crew, positions themselves dead in front of the cow. As the cow fixes their eye on Dela she very slowly walks directly straight toward the cow's face. If the cow slowly backs up there is a chance of a correct leg pose, if not a slow closer movement is made. And over and over. With close observation, when a cow shifts weight to the left or right my helper moves that direction to always stay directly in front of the cow. It may require a shift to the left or right, a forward movement, left or right and very slowly read the cow's thoughts until, slowly a wonderful pose is in place. Then, as the photographer, I prepare to be in the right place with the light and angle. Dela retreats and comes the direction of the Ranger Crew. While I hold the camera as steady as possible she does some movement that attracts the eyes and ears to point directly to me.

If this doesn't work we just drive around the pasture, take photos of other cattle then return and start over again.

When getting ears up, some things work, some don't. A lot of things work once then never again.

1) Things that don't work: Don't do pops, boos, loud spooky things, and bangs of the same sounds done when forcing cattle down an auction barn alley. These sounds, cows recall, are in cow language, interpreted, mean to turn away and quickly go somewhere.
2) Things that do work: Slow simple sounds at first, increasing if not creating attention. A rattling metal feed bucket, a movement of a Walmart bag on the end of a cattle whip, the sound of a bull bawling behind the Ranger Crew, a paper feed sack, or a person walking direct toward them. Kirk's grand daughter, Jazie, weighs about 40 lbs and does an effective jumping-jack that really works. 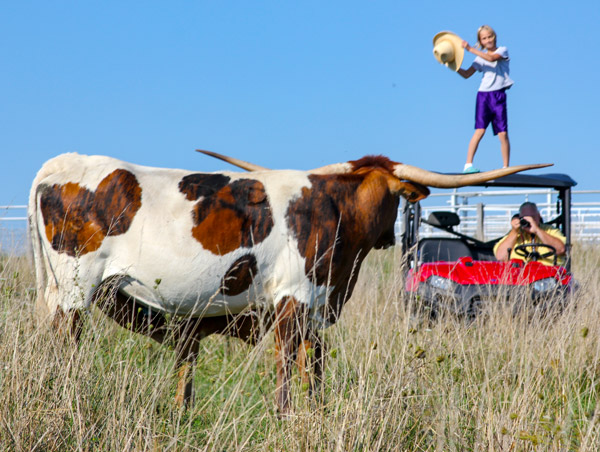 Unretouched photos, well planned, well posed, are of great value when promoting cattle. Cattlepeople like to look closely at the real anatomy. When a photo is poor and a photo shop amateur cuts around it with the skill of a kindergarten dropout, it is fake. It is a flawed representation. Cattlepeople deserve better. So take the time. Use the right season. Have a prepared photo team. Take it slow. Dedicate yourself to the job. When a kindergartner has to patch-up your photos -- not a good sign. 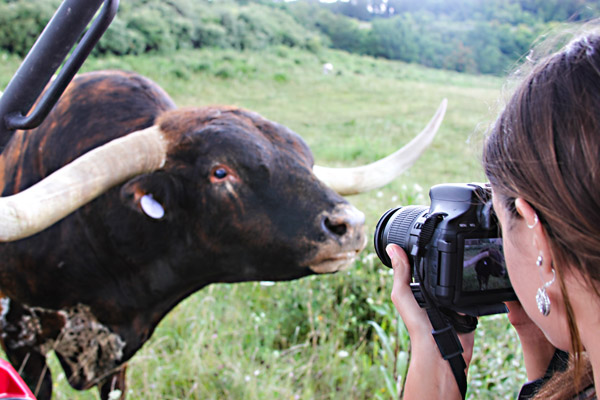