If you sit at the local livestock auction every animal that enters the ring has a weight displayed so each buyer knows. Bidders bid on pounds of weight times cents per pound. Pairs averaged $1050 each, and steers averaged $1.09 per pound last week. This is a wholesale salvage value. Most of these cattle sold will be processed within a day, or for sure, a few months. That isn't emotional, or a perceived value -- it is just plain pounds of beef-on-the-hoof, raw meat. It is a basic commodity. Cattle ranchers operate with salvage values, this is the lowest price this commodity sells for.

The average price for grass fed ground beef, in the USA, is $6.75 per lb. Some may buy a cow from the sale ring weighing 1100 lbs for $800 . It will yield about 34% grind. The cow will sell as retail grind at $2524.50, in a store. The processing will cost about $450, so that leaves a profit for all efforts involved of about $1200. That is the wholesale to retail commodity business. It is all about, and only about pounds. At the auction level it is a tight market with pennies separating buyers.

The local sale barn deals in commodity values on the wholesale level. It is a real business, but much different from the registered cattle business where genuinely perceived values out-weigh pounds. All successful registered cattle producers work to identify values that are real, marketable, and as far above wholesale commodities as possible. Success is breeding for accelerated values above pounds.

Understanding genuine perception, exercising instinctive value, and learning to breed for other than traditional "commodity" traits--these are more than wise habits. They are very profitable skills. Describe that sense as perceived. It is marketable virtue that also is a real business, but quite often much more profitable than the commodity itself. An example would be a young calf with only aÂ  hundred dollars of hamburger value, but excellent breed qualities that may be valuable and very sought after.

Here are examples of spotting/developing perceived values - the healthiest profit in the cattle business.

Lazy J's Bluegrass sold for $48,000 in the Hudson Valentine sale at age 10. He was the world's widest horned steer and a beautiful bold black spotted color. As a commodity he was about $3200 retail value for meat and perhaps other salvage income for a taxidermy head mount. The balance was the perceived value buyer John Viscup allowed for the personal enjoyment of viewing this beautiful, special steer for the rest of the steer's life. Color and horn spreads are a perceived value that can have high-value satisfaction appeal. To understand the registered cattle business' perceived values for unique sought-after traits is very important -- if you are successful!

Bill and Judy Merideth bought the cow 3S Danica for $380,000. Did they know what her weight was? No! That was not a perceived value. Was she as stunning of color as Bluegrass? No! Yet she was the fastest horn growing cow in history and holds that honor to this day. Her owners perceived the greatness of her horn spread, in a sought after Texas Longhorn industry, and considered she was worth the price. She measures T2T a little over 100." The perception of Danica's exceptional elegance was something to create joy, satisfaction, and pleasure for her new owners. And, that is the excellent perception factor of great value in this breed. Every profitable producer has to understand this.

Knowing perceivement, measuring it's value and learning to breed for it is a very profitable skill in any registered breed. As a judge of Texas Longhorns there is the salvage value, which is just like all generic cattle, then the colors that people love, and the great uniqueness of wide horns. These values must be understood by the professional show judge so the most high-value cattle are the champions. If the judge misses these points it will confuse the breeders and show himself unlearned. A judge must understand perceived values, or stay out of the Texas Longhorn show ring.

Horns are visual. Any judge can see a wide horn spread. Anyone who owns a tape measure is without excuse. Wide horns to Texas Longhorns are a historic symbol of purity of the breed. Lack of horn is an indicator of some other influx of shorter horned genetics. That is an easy call. Even history tells us in 1880 the small horned steers did not enjoy the legend.

The first observation of color value is the new-born Texas Longhorn calves. Most calves are the least attractive colors when young. Owners see them and many times miss their future perceived values by failing to project their mature colors. Brindles, roans and speckled colors are the most valued, yet as young stock these colors often do not show. Small calves all over the nation who will some day develop to high value-colors, are a disappointment to their owners when young.

There are families of cattle with the later-speckling, measling, or roaning colors in the lineage of the famous old Measles cow. If Longhorns trace back to her there is a chance of valuable late color explosions. 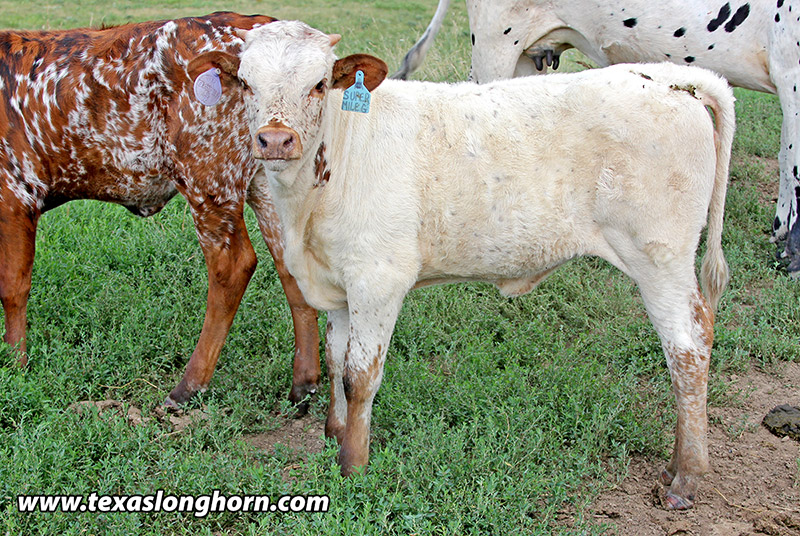 This heifer is white. There are producers who dislike white, a lot, and early-on dispose of white calves. The brindle on the left is probably the owner's more favored calf. 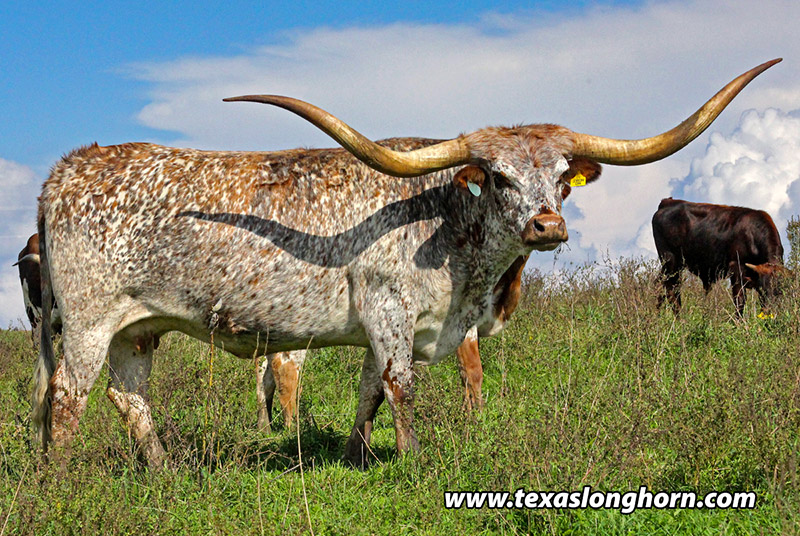 This is the white heifer at age 5 after winning ITLA International Champion All Age Cow. She has the late-roaning factor. 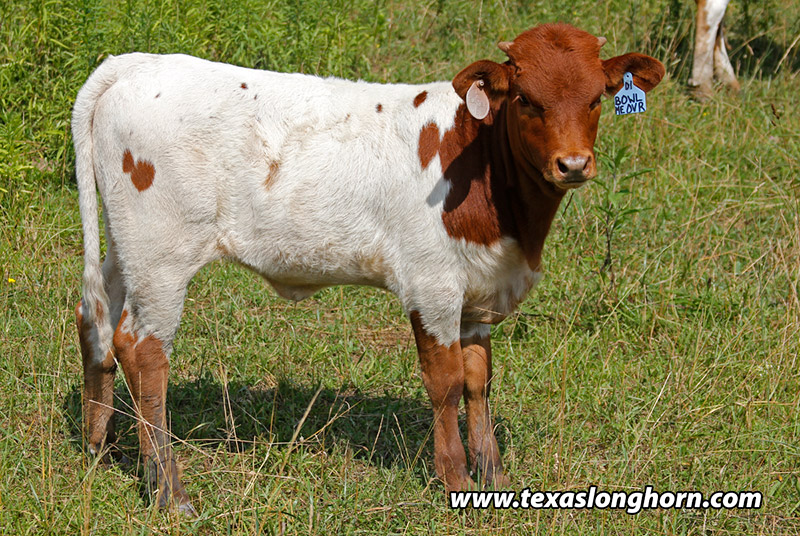 This heifer has a little more attraction than just basic white, yet does not catch the eye in respect of color. Very few buyers come to a producer's ranch and ask for a white calf with red head and legs. 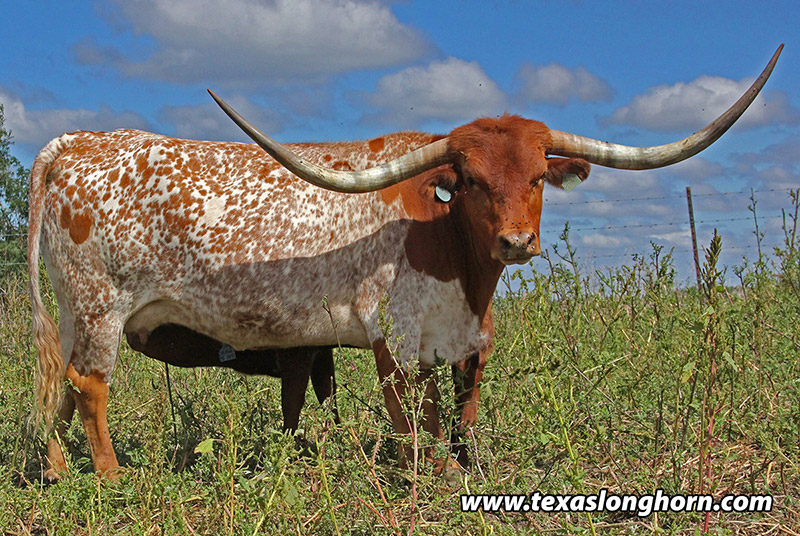 Due to the late measling factor, at age 5, she is a colorful stand-out in the pasture. Interesting enough, she traces 19 times back-massed to the Measles cow. Frequently if a pedigree traces to measling genetics the pretty colors will come. Some pedigrees do not have this factor and the white areas stay white for ever - it never changes. 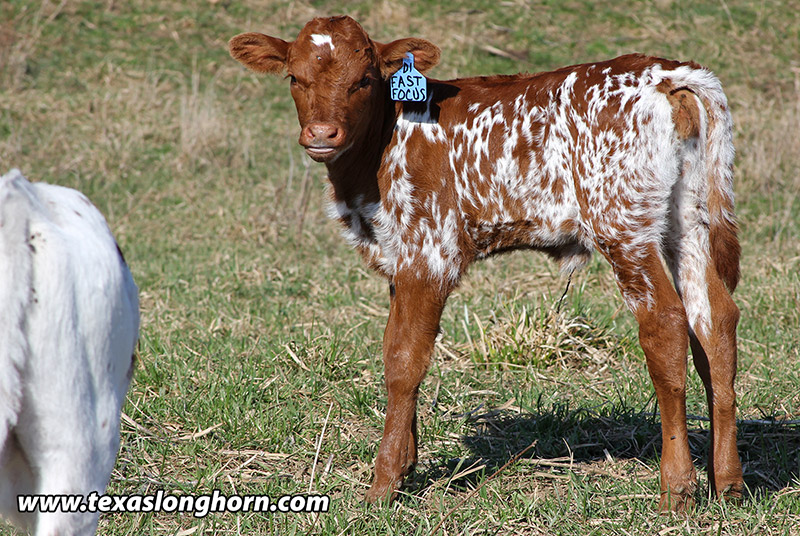 This heifer is a base red spotted color -- a good value color. A very pretty pattern. 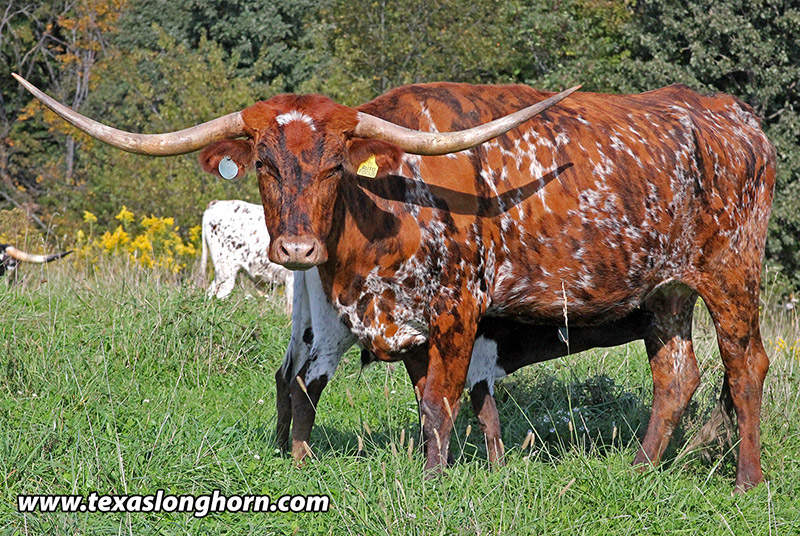 This is the baby red spotted heifer four years later as a beautiful vertical striped brindle. Brindles are a color value which is a "sought after" perceived high value, often more valuable than reds.

Good cattle people who know how to raise breeds by EPD's, DNA, and computer calculations, go bonkers when trying to understand perceived Texas Longhorn values. Although a rancher may be successful raising any number of cattle breeds, when they bump heads with the Texas Longhorn breed a whole new basket of factors surface. There are so many more virtue-factors when evaluating this breed, it is not for a normal cattleman -- nor a novice cattle investor -- nor a university cattle judge who doesn't understand the mystery of Texas Longhorn perceptions!