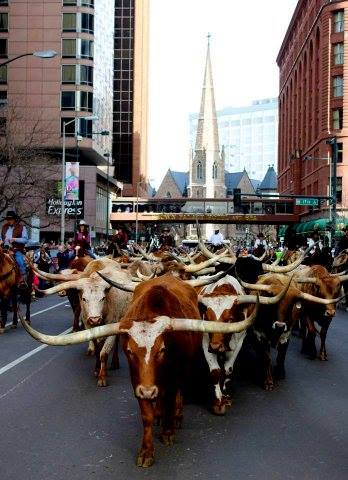 One month ago, on facebook, a "friend" was complaining about the Texas Longhorn associations not doing more to promote the breed -- he wanted to sell more cattle for more money. He was assuming his $60 ITLA membership would provide a national marketing effort making his surplus stock in great demand. As he will learn in time, $60 doesn't go very far in national promotion.

Last week, on the Wall Street Journal (WSJ), the front page, in full color exploded with an action shot of a Texas Longhorn cattle herd coming through the center of Denver, Colorado. Cowhands, about 17, moving them, perfectly controlled between crowds estimated at 85,000 people. WSJ used the huge photo with an accompanying article about the National Western Stock Show, Denver and Texas Longhorn cattle. This wasn't a $60 budget event.

The WSJ has a national circulation of 2,069,463. It is a U.S. business-focused, daily newspaper based in New York City. The WSJ, along with its Asian and European editions, is published six days a week by Dow Jones & Company, a division of News Corp. it is the third-most circulated newspaper in the USA. If advertising in WSJ, a column inch ad is $2,200. A full color page is $354,823, but the front page is neverÂ  for sale. While Barack Hussein Obama was running for president evangelist Billy Graham was so concerned about the election he placed a B/W full page ad in WSJ, at a personal cost of $277,200, encouraging people not to vote for Obama. https://images.dowjones.com/wp-content/uploads/sites/183/2018/07/13141526/WSJM-2066_U.S._general_advertising_rate_card-2018-v7.pdf 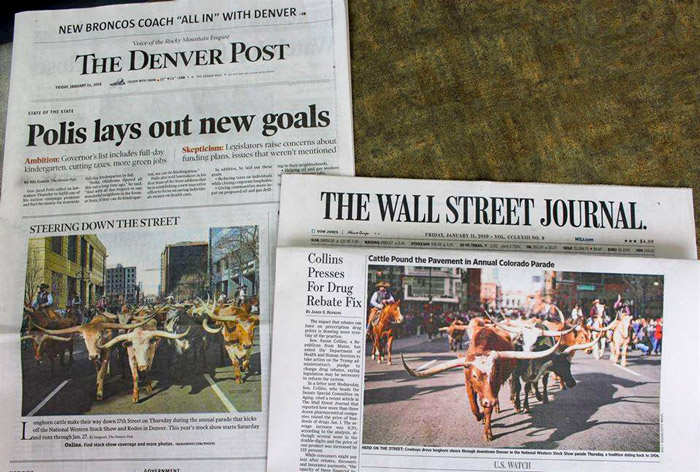 Stan Searle and Gary Lake of Silverado Ranch, Monument, Colorado masterminded the up-town event. It is the greatest promotional event in the Texas Longhorn industry every January. It is a professional and magnificently staged event. It always gets the Denver Post front page and has been politically finessed by Searle, the National Western and the city of Denver to be the promotion event of the year.

Who saw this coverage? For sure President Trump who reads the WSJ every morning about 3 A.M. Then governors, bankers, senators, and even ranchers.

This effort was not free. What did it cost Texas Longhorn producers, associations and those who profited from it? It cost them nothing. Searle and Lake cranked it out on their own.

Does Searle profit from this effort? I should hope so -- and rightly so. With a careful squint, an elderly wagon was pulled behind the cattle that said, "SILVERADO RANCH, Grass Fed Lean Beef, Monument, Colorado. This was the 13th annual drive, but the first time it made WSJ's front page.

Thank you Stan and Gary -- thanks a lot. You probably staged the greatest, most viewed promotion for the Texas Longhorn in history. What an example this sets for every producer to reach far and wide for ideas to not blame others, but get out and make a stab at promotion that really counts. You did it right -- you did it big, Stan and Gary!! Thanks from all of us.