When To Collect The Bull?

Over 1200 Texas Longhorn bulls have had semen collected, yet the number of calves resulting from Artificial Insemination (AI) is less than 10 registered calves per bull. Although it seems quite vogue to have the senior ranch herd sire collected, a high percentage of collected bulls were probably unprofitable. Hundreds of bulls do not have one calf registered which was conceived by AI.

How, why, when, where and should the bull be collected? Let's look at some good and risky parts of this important -- decision to collect.

If a bull is special, unique, unreplaceable and has virtues of great value, by all means he is a prospect for collection. As a form of insurance, even if only 50 to 100 straws are collected, at least if the bull dies his genetics can be preserved in-herd. No health tests, AI Enrollment or costly AI Certification are required for in-herd use. The collection might be as little at $300.

If there is a plan to market semen, and calves be eligible for registration, a bull must be either AI Enrolled in ITLA or AI Certified in TLBAA. ITLA charges $100 and requires DNA of the collected sire. TLBAA charges $150 and requires DNA of collected sire, his sire, and his dam, and PV. The TLBAA board holds the right to certify a bull or refuse certification, but one health test in the lifetime of the bull qualifies him for collections throughout his life. ITLA automatically approves sires that comply with the requirements but requires reproductive health testing during the months of all collections. With these costs most collect 200 to 1000 straws, and incur numerous collection fees. Costs may be $1500 or more depending on numbers of straws and time required to be collected. Last year Cut'n Dried and Spokesman, at DCC, were collected for real semen, some sexed semen and some semen for internatinal export -- costs were over $31,000 for the whole process which took over 5 months. 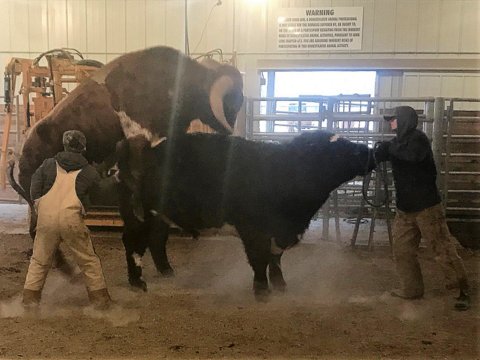 Just because a fellow producer says, "If you collect that bull I want some semen." Don't believe that is enough reason to spend $1000 to $3000 on collection costs. They may only want one straw.

A new producer called me and said they had a really good bull. They were going to collect him and sell a lot of semen. I ask if they had clients who would buy, have they marketed semen before and the answers were no. Not a good way to start this business.

It is a unique business. Not everyone wants to mess with small semen orders. When Cowboy Tuff Chex was first offered there was a 10 straw minimum at $300 per straw -- that was a nice business. However selling 1 to 5 straws at $20 each might not be as much fun.

If a semen buyer is really serious, ask them to prepay for semen. A nice prepaid order takes the gamble out of the collection decision.

A certain percentage of bulls who may breed big herds in the pasture may not collect. There are numbers of reasons. A one time ranch collection may be inconclusive. Most quality semen is collected at semen centers with labs capable of careful analysis, with multiple collections and professional evaluation. If it isn't high quality, professional labs discard the collection.

Taking a valuable bull to a new facility where a hundred bulls are housed -- where care takers and handlers may not be experienced with Texas Longhorns, is a serious decision. Some collection centers have a reputation of working with wild deer and all kinds of bulls. They have professional experence with a well trained staff. Others may not. If a valuable bull gets spoiled by poor handlers, it may be a non-reversable problem. If he is housed near a cement wall, maybe a feed bunk against a wall, horn tips can be worn off, never to return. There are a lot of things to consider.

What is semen worth? Very special bulls that offer extreme values can be really high. Phenomenon semen has sold for up to $1000 per straw for the last 10 years. Very little is available. Semen from Jamakizm has sold in abundance for $1000 per straw. Clear Point, a 2245 lb. bull with 91" T2T sells for $500 per straw. These high prices are rare -- so rare they may never happen in most breeds.

Craig Perez of SEMEN HUB, from his years of experience says, " Most SH orders are an average of 3 straws (1-4 straws). Most bulls will never sell 50 straws. For every 10 bulls collected, one will dominate 80% of semen sales. One bull will capture another 10%. Six of the bulls will fight it out for the remaining 10%. Two bulls will never sell a single straw."

To pick a price, if there are several brothers, like sons of Cowboy Tuff Chex, unless one comes along superior to all the other sons, the semen price should market about $10 to $20. There are dozens of them, all very similar. One more might be a hard sell. Always consider rare genetics, and not-so-rare when arriving at a real value semen price.

In the eighties, Richard Robbins, Jr, of Belvidere, KS, took all of his bulls from Anchor D Ranch to Rocky Mountain Sire Service and had them collected -- a total of 18 bulls. Straws totaling 24,767 were collected and none were offered for sale during his life. He faithfully paid storage fees to RMSS of 2.6 cents per straw per month -- totaling $278,182 during the 36 years. His collection costs were $99,068. Mr. Robbins was a fan of WR, Yates and Niobrara bloodlines. In March, 2019 his estate liquidated the semen inventory at the B & C Sale and received bids of $125 for two packages of over 1000 straws each.

The hidden cost of semen is storage. It seems minimal, but it can, as the Robbins Estate found, run into money.

The most economical way to preserve semen is a liquid nitrogen storage tank held in a secure place on the ranch. A new tank costs from $850 to $1300. A large tank would hold 3000 straws and would need recharging with liquid nitrogen every 3 months.

Semen collection centers will store semen. They also have a service provided of shipping semen for their clients. An arrangement with the semen center to store and ship sold product is what many do. Very few collection centers will assist in marketing. Bovine Elite at College Station, TX is one of the few to offer that service.

When semen is sold on high quality bulls the sire owner has a responsibility to promote the bull. If the semen buyers have no market for calves, then semen sales will quickly drop. Very few bulls are outstanding enough to retain family value without continued efforts with national promotion. Knowing the promotion plan for a bull is a reason to buy, or not buy semen.

What makes your bull special compared to other bulls in the market? Call knowledgable producers and ask if your bull has the value to collect.

Take some time to focus on your herd. Breeders will judge your bull's production based on the calves he sires. If he doesn't produce outstanding progeny with your cows, breeders will assume he will not produce well with their cows.

Unless a bull offers some special genetic value, some unique quality, some proven consistent family value, maybe it is not a good idea to collect. If the bull considered for collection can be replaced with as good or better bull, or if semen is available on other similar, superior bulls -- semen collection might be a sketchy financial venture.