With truck loads of bad news for 2020, there is good news in several quarters for Texas Longhorn producers. While most had zeroed in on production of horns and spots, in 2020 it was a record year for Texas Longhorn beef sales -- quarters, halves and grind by the gooseneck load. Many producers who had only considered the local livestock auction as a point of liquidation found multiple profits from sales of lean, grass fed or grain fed TL beef. Several who had worked developing a clientele found excitement from total sell-outs, and, even so much demand it could not be filled. Some reported $50,000 to $150,000 in increased beef sales during 2020. One producer sold over $4000, with some help from grand kids, in the Walmart parking lot at Bastrop, TX, out of a ranch van -- before Walmart chased them away.

Due to the increased excitement from TL beef sales many are looking toward families of cattle with more gain ability. The faster growing, bigger cattle proved in 2020 good increases in profits.

While many businesses suffered from government induced enforcements, everyone found TL beef sales are "essential." Everyone wants to eat. A double whammy to increase sales more would have been to give a roll of toilet paper with each box of beef. 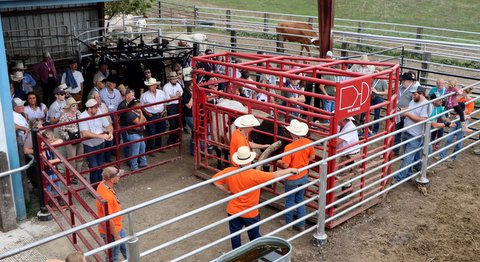 To move with this popular, national trend, the TLBAA Horn Showcase added weighing to the already popular horn measuring event. Beautiful bronze horn awards were viciously sought, but in the fine print was the official weight of entries. In the December Trails all weights collected are published. All entries at the Oklahoma event were weighed and some at the satellite sites. The following list of 26 bulls are in order of size/weight born from December 2017 on to the oldest bull classes. For more data, check out the Trails with pedigree, actual age and owner info.

At Dickinson Cattle Co we congratulate the BOD and Horn Showcase management that has expanded the data base for all producers. This data will be helpful and appreciated by those seeking to raise the total Texas Longhorn. This adds one more useful comparison tool to increase profits. Thanks to those who made it happen.

The weighing scales and measuring tape rule when breed progress is the goal.