For 28 years I was elected to serve on the board of directors of TLBAA. A lot of things came up for the board to decide on -- some easy, some hard.

About 1980 a man showed up at a TLBAA board meeting. He had a burr under his blanket. He had bought a dozen Texas Longhorn cows in his local Texas livestock auction at scales/weight prices. They clearly had the famous YO brand and TLBAA registration ID numbers. They were registered cattle -- purebreds, no doubt. He had possession. He showed a sale barn invoice of purchase. He wanted them registered. They were his cows. He knew the records would prove they were registered. The auction barn would not help him. The consignor would not give him the papers -- he wanted TLBAA to give him registration certificates and he would gladly pay the normal fee.

The board had opinions. Everyone wanted to sign him up as a TLBAA member and get him started in the business. If he registered these cows and bought a registered bull there would be registration fees coming in each year -- that would be good. He promised to become a good member. Most BODs were ready to sign him up. He had compelling photos of all the cows showing their brand numbers. One board member knew him and said he was a quality person. He was going around the sellers and direct to the association for action.

Then it happened. Charles Schreiner III, owner of the YO, who had consigned his cull cows to a generic auction, without registration certificates, just happened to never miss a board meeting. In opposition to the majority opinion, he stated he had sold some "less than desirable" YO cows, by the pound, without registrations to cull the YO herd.

The new buyer was confident that registered cattle were many times more valuable than unregistered. It was worth a college try. He alleged he was deceived.

It now was very clear. The TLBAA board declined to give registrations on the newly purchased YO cull cows.

At first I thought Schreiner was very brazen -- absolutely shameless. Then I realized he was dead-on right. He was protecting the value of YO registered Texas Longhorn cattle. The buyer bought exactly what he paid for, but, he wanted a lot more. Instead of $500 cows he wanted $2000 registered-value cows with a $15 payment to TLBAA for the up-grade. It didn't happen!

Many producers of registered cattle face this same issue. They sell at local auctions and are shamed into giving over the registrations. Schreiner protected his herd value. He was too sharp to surrender the registered value for zero premium in return. This is how the business must work.

Tip: Here is the test. In the registered cattle business the buyer proves their integrety by valid funds. The seller proves their integrety by transfering the registrations and paying for that fee. Can anyone connect the sale of a ranch, and the seller not do the title tranfers. Title is important and it should be done in a few days after purchase. Trying to recover documents years later generally fails.

Never sell intact bulls at generic auctions. Someone will buy them cheap, and that will reduce the number of clients who need your bulls, and publicly reduce the value of bulls remaining in inventory. Local sale barn buyers will wait you out, until near the end of bull season, and buy at hamburger price. That publicly appraises the whole pasture of bulls as only worth hamburger value. Preserve values. Preserve values by castration.

Tip: Other similar things can happen. Arlan Bush, a dear friend, president of the Mid Atlantic affiliate asked me to donate semen to be auctioned at the annual Tyson Leonard sale with proceeds going to Mid Atlantic. I donated 10 straws that were selling for $50 each. It auctioned for $6 per straw and one of my clients, that had been buying straws at the published price, was very happy to sneak into that deal for $60 instead of $500.

Tip: People who auction semen most always damage the real market price. It never sells for more than published price. The more semen distributed the less that will sell for normal price. If you want to donate, give money and protect semen inventory value. 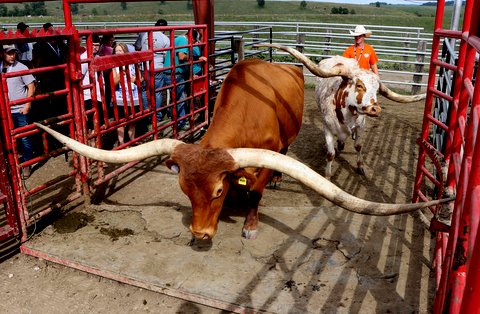 Tips: Many years ago I used to lease out bulls. It got them off my feed bill and some money was received. Then -- there is the liability issue. If something happens to the bull, who pays? With the high cost of insurance, normally who takes the hit? I called a guy from Hugo, Colorado and ask when he was bringing my bull back and he said, "Didn't you know -- that bull died?" In fact, I did not know that! Another leased bull, "Your bull won't stay home -- he jumps fences, I took him to the local auction and will send you the check." Where did he learn that trick?

When a bull developed a bad habit under their management, it was always "my" bull. The dead bull was "my" bull.

It is my experience that no one takes as good care of a bull as the owner. The owner has the most invested and the most to lose.

Tip: What if you borrow a bull? What if all your bull buyers know you borrowed -- now they want to borrow your bulls. No one will want to buy good bulls, everyone wants to borrow. The more borrowing, the less bull values will be. This slowly annihilates not only yours, but your fellow breeder's bull values. Preserve values.

Tip: Some feel they can afford cows, but can't afford to buy a bull. When someone wants to borrow or lease a bull offer a pay-out purchase. Give the person an option to pay a third now, a third in 6 months and a third in 12 months. If your bull makes friends with a diseased cow, he won't return home with a communicable problem.
There is also the option to AI breed cows if the pay-out is still too hard.

Tip: Old semen can be a problem. At time of purchase or collection it could have been the greatest bull ever, but years have passed, and many other young bulls now have developed into increased value. The water flows right on down the river.

Tip: Buy enough semen to use for 2 years. Use it. Most bull semen that is 10 years old has a much-reduced value. Entry-level people don't recall old bulls, except the really great ones. Don't give it away -- it is not valuable for other people either. Don't sell it at auction and destroy any value remaining. Throw it away, or sell it for commercial heifer calving outside the registry.

Tip: Don't buy semen unless the bull is well advertised and will be advertised by the owner for years to come. When bull promotion efforts stop -- the genetic value tanks.

Tip: Liquidation is not the most fun, but it can be done with dignity. It can be done without destroying values of the breed, and values of grand old genetic families. Think it through. Be comfortable with Texas Longhorn cattle as a business, a good and serious business. Preserve values for your fellow producers, and protect this historic breed with intelligent marketing.