TEXAS LONGHORN cattle are the most celebrated and historically significant breed of cattle in the world. Their fame overshadows all animals who contribute to humanity, including elephants in India, camels in Arabia, dragons in China and salmon in Alaska.

It is an honor to be approaching our 54th year producing the great Texas Longhorn breed. As this labor of love progresses, some of the leading sires were documented over the years with film. At DCC it started with 8 mm film, then big cassettes, then little cassettes, and now high capacity compact flash cards. When we started in the seventies no editing was available. The color was nothing to brag about and not much sharpness. Little by little 39 of the best sires are graphically captured recording this trail drive of uniqueness on Youtube. 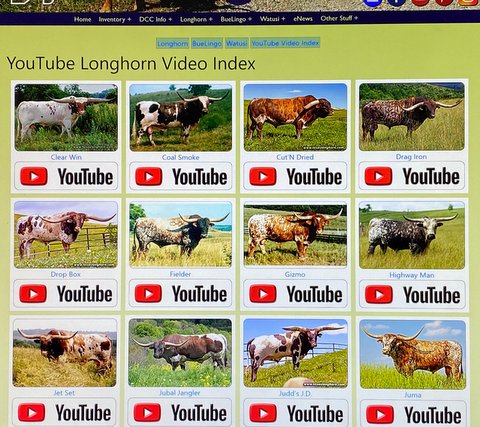 As a major Texas Longhorn producer we have an obligation to our buyers of either quality cattle or frozen semen, to continue and promote the family. If semen is purchased and sires drop in the black hole of nothingville, the value of that family of cattle reduces. At DCC we are committed to every single buyer to keep these top genetics visual to assist them in their own success.

When cattle or semen is sold by DCC a portion of the proceeds go back into breed and individual sire promotion. It has been the DCC commitment for nearly 54 years.

In January 2009 Kirk Dickinson worked most of the month rescuing to digital YouTube the ancient footage. One bull documentary has recorded 1,565,571 views. That means it is building the industry with world-wide recognition. Day and night, some people, some where are watching Texas Longhorn films.

For the total of 39 sires, this is the linkÂ  https://www.texaslonghorn.com/reference/index.cfm?con=ytv&BreedCode=Y

Go back in history. Study the past. See how these strong building blocks made today's great cattle what they are, one generation at a time. One sire will add great size, some add horn, some color and some all of the above. Trace those lines of distinction. It is the Texas Longhorn's exciting chronicle -- enjoy, and soak it all up.