Memo: Japanese Yew is the cause of death for thousands of horses and also other livestock. These beautiful evergreen bushes can be found in landscaping designs at many fast food front entries. They can be trimmed to be any shape, and quickly grow into pleasant forms. This is a highly popular bush for industrial decor and residential use. They are very attractive until you feed leaf trimmings to livestock. A stetson hat full of Yew leaves will kill a horse dead. Although they are pretty, and they are green all year, they will kill your animals. The Yew is not worth it! - Darol Dickinson 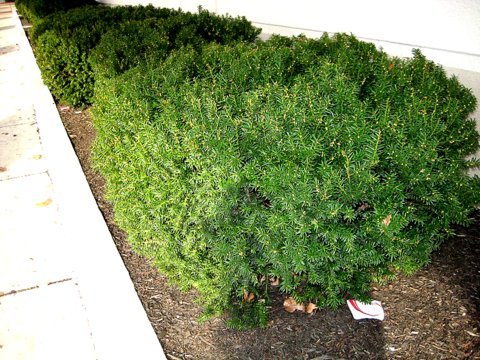 So Lush, So Green, And Oh So Poisonous 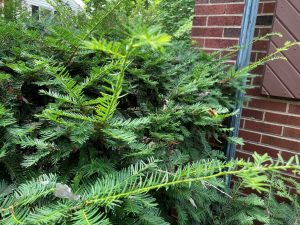 A yew bush used as landscaping is in need of a trim. Don’t feed the trimmings to livestock or death will occur.
(Photo Credit: Keith Johnson)

It’s that time of year when the yew (pronounced like the letter “U”) is likely in need of a trim to look best as a landscaping plant. Yews have been used as a common landscaping shrub or small tree for decades. They have closely spaced, glossy, rather tough, dark green, linear pointed-end leaves that are 1.5 – 2 inches long.  Hard-to-see male and female flowers are found on separate plants and form fleshy red to yellow fruits that contain a single seed.

Many plants have poisonous compounds that can cause all kinds of concerns, and even death, if consumed. The interactions that I have had with veterinarians, suggest that the yew is right at or near the top of plants that cause livestock death. A disheartening scenario is when yew trimmings are thrown over the fence by the livestock owner or neighbor thinking that the trimmings would make a great snack for the livestock. Fresh or dry trimmings, it doesn’t matter. The result will be the same – death.

Yews are hardy perennial landscaping plants, but don’t toss the trimmings to your equine, heard, or flock or they won’t see the light of the next day.

In memory of livestock that met “Their Maker” because they ate yew.