Celebrating the 55th year of raising Texas Longhorn cattle at Dickinson Cattle Co was a joyous event with the annual Customer Appreciation Day, near Barnesville, Ohio. The goal is to invite all our great customers, at a beautiful time of year at the ranch, demonstrations of profitable procedures used at DCC, wonderful and sometimes wild and crazy great food, photos of everything, celebrity Longhorn lovers from all over, pasture bus tours, kids running everywhere, and the star of the event is the great Texas Longhorn breed.

Now, if you missed this event, it is sad that you went to a junior Antifa recruiting meeting, or a raw sushi eating contest, or a training session for bad husbands, a Ukrainian weapon fundraiser, or just forgot. It was your loss. To help you feel really depressed for missing out, here are some photos of the fun and educational day. Don't make the same mistake to miss out next year. 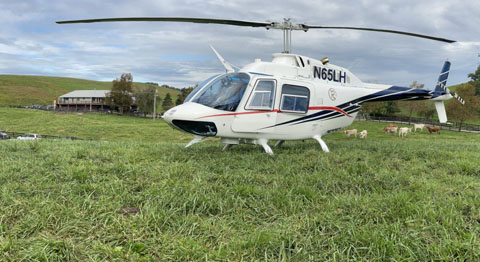 Creating quick excitement, Ron and Jen Fuller arrived from Tennessee under these loud propellers. Every kid and most adults were envious of this beautiful transportation. Unfortunately, no room to load purchased cattle and take home -- bummer. It's just not a perfect world. As people were arriving, the over 100" T2T DCC steers were driven up the drive way to a holding pasture for guests to hand feed during the CAD. 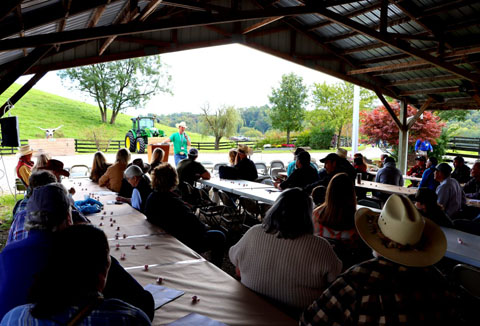 Doug Burris prepared a dialog on expanding the ranch with leased land. Many are growing herds and needing more grass in areas where land prices are increasingly costly. 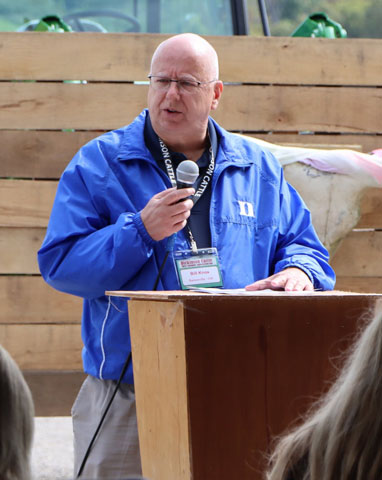 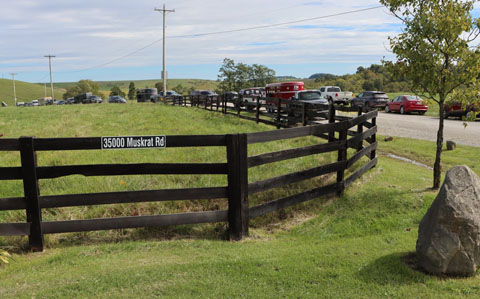 Cars and cattle trailers were parked for a quarter mile both ways on the sides of Muskrat Road. It was a beautiful day in Ohio, about 68 degrees with fall leaves starting to turn rich colors. 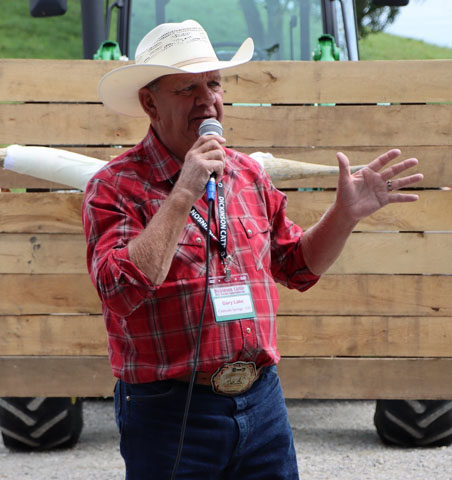 Gary Lake of Silverado Ranch in Colorado was DCC foreman for 16 years. He presented a "mostly factual" history of the Dickinson family while developing the famous Texas Longhorn genetics from 1979 to 1995 before DCC moved the headquarters to Ohio. Comments of fact, and some embarrassing, featured Darol Dickinson coming up 80 years old in October. 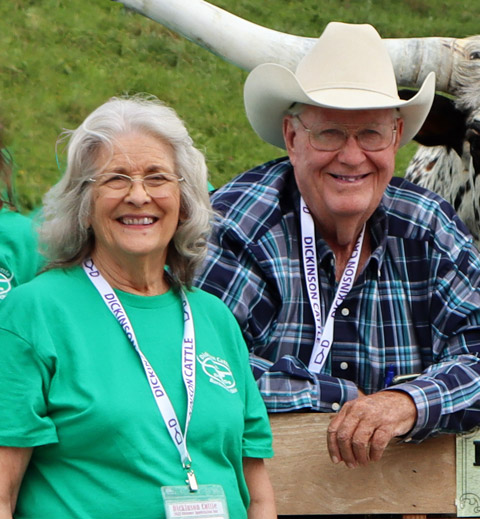 For some really old history -- Darol and Linda Dickinson started this whole effort in 1967 by purchasing 6 Texas Longhorn cows and a bull. Things happen.... not always fast. A sort-of, different guest speaker was Tommy Squires of Allen's Coin of Columbus. They are the largest outlet for silver and gold in Ohio. Many are sick of the reducing paper dollar value caused during the Biden reign and wish to convert dollars to metal. They were well received. Mike and Valerie Kennedy, new Texas Longhorn producers. Mike is a Hollywood stunt man turned repo pilot. The "Airplane Repo" reality star Mike Kennedy is well known for his popular series filming repossessions of high dollar air craft for banks and owners of stolen planes. The Disney TV feature nicknamed Mike "The Lone Wolf" in the series. It was fun for his interests to target something on the ground -- Texas Longhorns. 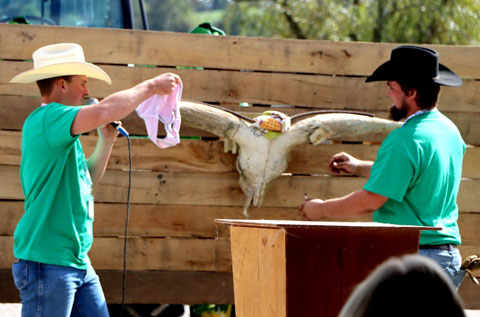 Doug Burris and Brody Carpenter demonstrated casting a broken horn with the rebar-panty process. It is one thing to read about the process on www.texaslonghorn.com, but more graphic to watch it done in person, in just a few minutes. Bry Dickinson was in charge of feeder steer sales and his aunt Dela Lenz was taking all the photos. 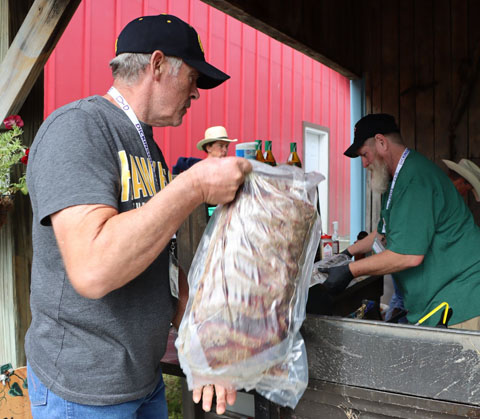 Son-in-law Steve Lenz brings a chunk of prime rib from the sous vide (su: vi:d/; French for under water vacuum) process for a final outside torching. Kirk and Joel Dickinson worked for days preparing food for nearly 200 special people. Here is the torching prime rib final prep. The deputy was anxious to be a part of the food process. Joel Dickinson and Paul White of Florida with Kara Dickinson and her clip board. Kara was in charge of heifer and bull sales for the day. Her first sale was a $6200 pair. Super cowboy Gary Lake taught a session for all ages on the fine points of roping a Texas Longhorn. There were a few rope-burns, lots of misses and some sweet dead-on catches. 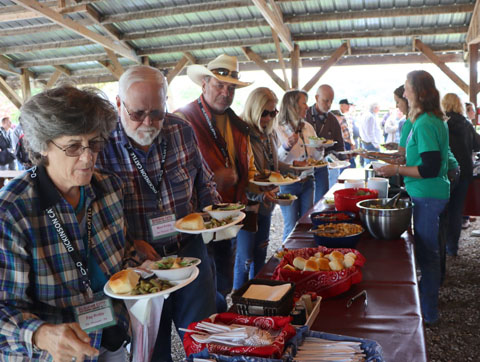 Professional "eaters" came from 17 states, and they will never forget the event. 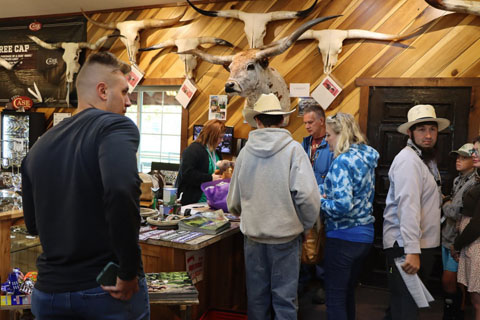 Guests visited the LONGHORNS HEAD TO TAIL STORE, making purchases they could not find at Walmart. There are 76 different unique products made of horn. The store is all about the cattle. 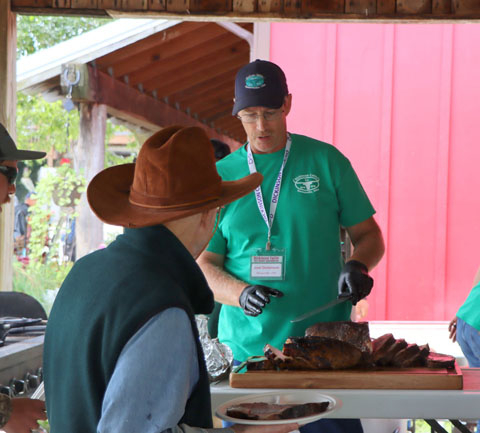 Joel Dickinson slices a thick chunk of beef for professor David Richardson, of Cleveland Heights. None of that spindly quarter inch stuff you can read a traffic citation through. 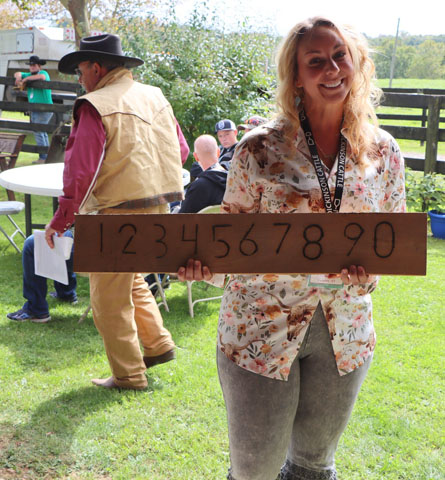 Christie Thompson shows the DCC running iron process of drawing clean brands all with one iron. A running iron can be purchased at the LHTT store for only $45 and will do all numbers and most holding brands. After a Ukrainian battle this steer, that might have escaped, was captured by quick strong volunteers. Good help is important. 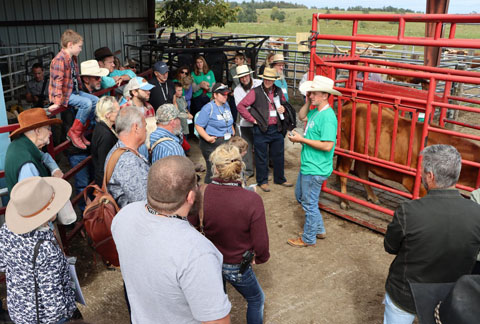 Doug Burris demonstrates correct branding. Many brought their cattle to the CAD for branding volunteers and some for castration banding. Just 4 years ago William Timcheck brought his calves to brand. WT Mr. Big Kill was the most famous calf branded at a DCC event. William Timcheck was a dear friend. RIP, (rejoice in paradise) The ranch buses took guests to a 5 pasture narrated tour during the afternoon with faithful employees Teu Dickinson and Harleigh Temple as pilots. It was a long day. They are good. The key to a successful event is family and cast members all working together. What a great day with wonderful Ohio weather, and all of the above, right on schedule. If guests felt special, it is a fact --- they were.

A heart felt THANK YOU to all attending the CAD.