This assortment of photos is not the total news of the entire show. All the winners of all the hundreds of cattle and people will be in the next ITLA eDrover (free by request) electronic publication. That report could take volumes. This is only a report of Dickinson Cattle Co's involvement and other folks who use the DCC bloodlines, in a competitive way. If you were in attendance taking photos and videos at the Duncan, Oklahoma event, you saw this already. If not you missed a great event with a lot of great cattle people. It starts, like a session of Congress, with a bath to look good for the constituents. Fecal happens. These are the 4 DCC female entries. In the foreground is Precious Mark a two year old by Point Mark. She is one of the most correct young cows ever raised by DCC. These DCC entries won 3 firsts and a second in the ITLA Championship Futurity. At the ITLA Championship Futurity Point Not won his futurity division and was high point score of all bulls entered. He is by Point Mark out of a Non Stop daughter, born 5-4-21. So What and Promenade were shown in the Non Halter classes by Diamond B Ranch, Amarillo, TX.Â  Promenade won International Champion Non Halter Reserve Grand Champion female. Each were shown with calves at side. Collin Wyatt, Diamond B Ranch Manager was in charge of cleaning pens of poooo, washing cattle and getting them presented professionally. He stands by Iron On, ITLA All Age Non Halter Grand Champion Female. Precious Mark, age 2 with her Ice Pick heifer won the age 2 class, but decided to revolt during the Championship class and the judge did not reward her for bad conduct. The fact DCC has only attended two shows this years the DCC cattle are not old seasoned show cattle. The DCC cattle have to win by quality, not showmanship and experienced training. 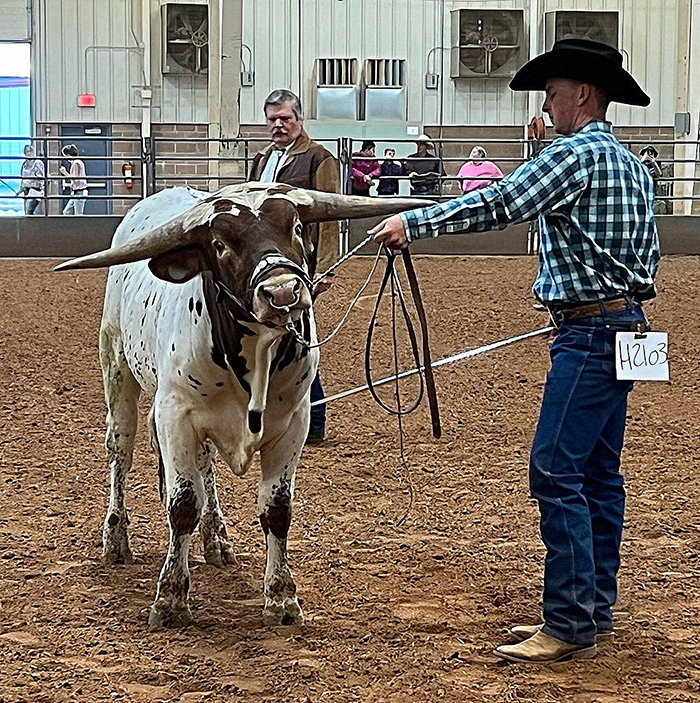 Point Not won the judged ITLA Championship All Age Bull award with stiff competition. Many of the competitors had won shows all over several states. Judge Russell Hooks was just elected by mail in ballot for President of ITLA. He is one of the most used TL judges in Texas. Doug Burris, DCC Jr. Herd Manager showing. 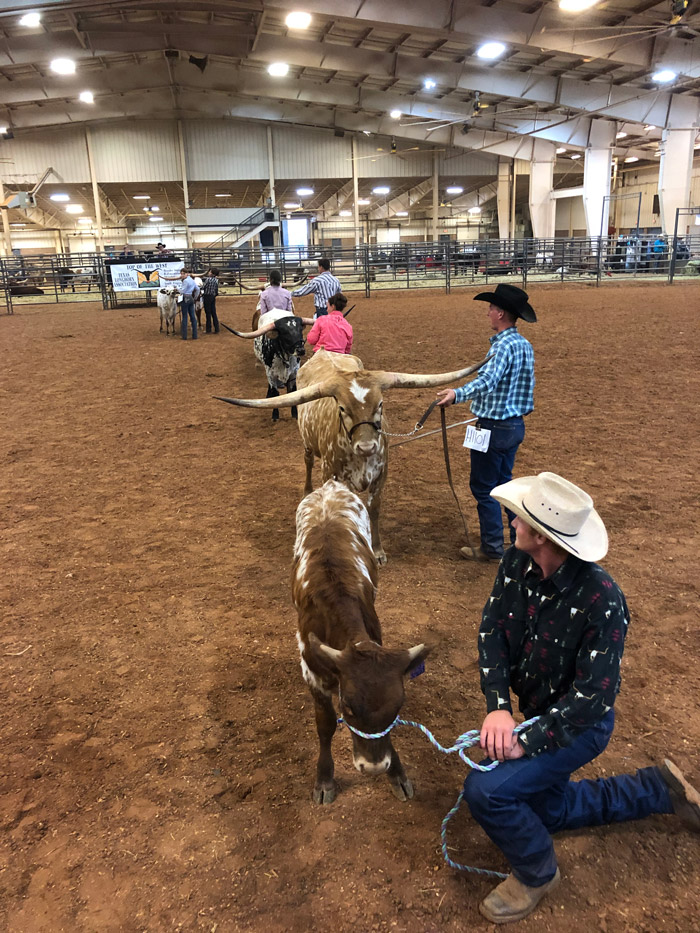 50 Smiles, age 2, with her Cut'n Dried heifer calf won her halter division shown by Bry Dickinson and Doug Burris. She is owned by Joel Dickinson. Fine Line, age 3, with her heifer by Cut'n Dried won her division. Shown by Doug Burris and Collin Wyatt. An offering is being taken up to purchase Collin a western Stetson hat. He is repentant for not being more western. He is still a good guy. The 50 Smiles family was International Champion Senior Heifer. L -R, Bry Dickinson, Joel Dickinson and Doug Burris all with smiles like a wave on a slop bucket. The Championship Show is big -- open to the world. Not easy to win. During the General Membership meeting Dickinson Cattle Co presented a Dickinson Arms XX3 Tactical Marine pump 12 gauge shotgun to out-going ITLA president Larry P Smith II. Larry has served for 8 years, probably a record of endurance. Larry's wife Heatherly teaches public school in New Mexico and may take the Tactical to school to keep safety and order -- it's her choice. Just the sound of one pump and the kids will quickly settle down. Watch the upcoming eDrover for a full report of the event.