The good and bad in a registered herd.

Abnormalities are present in all species, including virtually all breeds of cattle. Some abnormalities can be identified visually because of the obvious differences between a normal animal and an abnormal one. Abnormalities in cattle may be caused by a variety of factors, including the environment, infectious agents and genetic mutations. Environmental factors, such as toxic plants, can cause an abnormal calf. Likewise, infectious agents (such as bacteria, viruses and fungi) may result in an abnormal calf. The following data relates to those abnormalities that are pathological (disease) conditions of genetic origin. These types of abnormalities have come to be known as “genetic defects.” Genetic defects include an impairment of health or a condition of abnormal function, due to a broken or mutated gene. Before designating a condition a genetic defect, it is important to give consideration to environmental and infectious possibilities.

The American Angus Association currently recognizes numerous genetic defects. These defects may result in either increased mortality, increased morbidity, decreased production, and/or decreased ability to market cattle. As such, their unchecked presence in the population is undesirable. The most known include Dwarfism, Osteopetrosis, Double Muscling, Syndactyly (mule foot), Arthrogryposis Multiplex, and Heterochromia Irides. Although these defects are undesirable, some of the most sought after Angus genetics are proven to possess these traits. When these defective traits are out-crossed to unrelated or non defective genetics their frequency can be managed to zero.

From a more scientific view, mutation, the process which produces errors during copying of DNA, is a fact of genetics. It is unavoidable and unfixable. This means that every calf born in all herds carries approximately 30 mutations that originated in the sperm and egg that created the calf. Only 3% of an animal’s DNA codes proteins, so most of these 30 mutations do not affect genes. But, a small number of these mutations will be within a gene and the protein coded by that gene will no longer function normally.

They sometimes refer to these genes which carry a loss of function mutation as broken genes. This means new broken genes are added to the pool of existing broken genes in the population every calving season. The mutations responsible for these broken genes usually disappear from the population simply due to random chance. Occasionally a mutation will rise to higher frequency and will be passed down through generations often as a result of inbreeding. Most of these broken genes carry recessive mutations; this means that two copies of the broken gene must be inherited for the animal to be affected. When only one copy of a recessive mutation is inherited from one parent the animal is normal because it uses the functioning copy inherited from the other parent. Many of these unusual scientific happenings are not documented or even noticed by the owners.

Seven days after cows are mated, 90 + - % of the matings result in pregnancies. But, when we observe cows 45 days after the mating, only 60 to 70% of the cows are still pregnant. Cows are aborting about 20% of the pregnancies during the first 45 days. While handling and nutrition influence these pregnancy losses, genetics also play a role. Twin pregnancies increase the abortion percentages.

On average, an animal will inherit 100 broken genes from its parents. Of these, 20 are lethal, meaning if two copies are inherited the embryo dies during pregnancy, usually early in Mutation, the process which produces errors during copying of DNA happens, and always will. 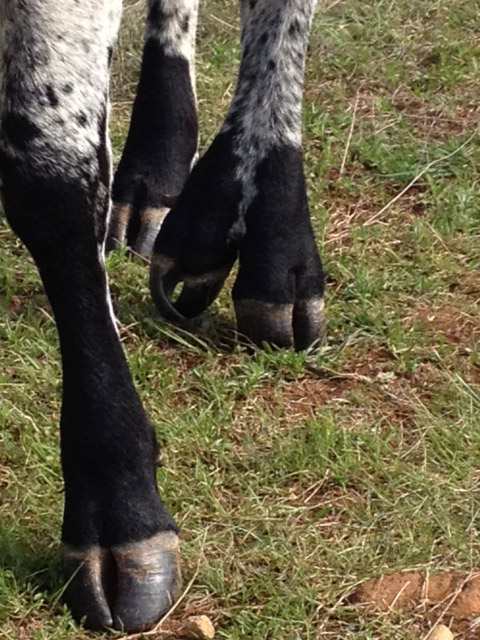 Researchers at the University of Missouri, along with collaborators from the University of California-Davis, Oklahoma State University, Delta G, and University of New England, have sequenced the entire DNA of 254 bulls. Using this DNA sequence information, they can identify DNA variants that could possibly lead to broken genes and embryonic losses. From this data they have identified 4,821 possible variants, of which 347 are within genes shown to be essential for life in mouse or human. To validate whether or not these DNA variants are responsible for embryonic losses, they will test these variants in 10,000 heifers. If they never observe an animal carrying two copies of a variant then they have strong evidence that the variant is a recessive lethal and causes embryonic losses. We can then create a DNA test (i.e. genomic prediction) for embryonic loss and measure how many broken genes an animal carries. And, what you can measure, you can manage.

Jon Beever PhD, of the Urbana, IL, Department of Animal Sciences has made a life study of genetics, genomics and bioinformatics. He was contacted by the BueLingo Beef Cattle Society when a member had concerns about an unusual defect found in his herd. Semen from historic foundation sires was provided with hundreds of hair samples from most major BueLingo herds. After thousands of DNA tests were preformed at U of IL, all defects traced back to a bull named Chilingo who was sired by an imported Italian Chianina sire named Yuma. A certain percentage of his progeny were also PMT (Congenital Pseudomyotona) yet as the PMT genetics blended into non PMT genetics it was diluted to minimal effect. Although originally thought to be a problem that would tarnish the breed, data of registered BueLingo during 2014 revealed 791 tested PMT free -- 71 PMT carriers -- 1 PMT affected and 3 pending inconclusive. Now that the one origin was identified the carrier, and PMT affected animals can be removed from the herd or carefully mated to PMT free animals and the issue of concern will be history.

In certain breeds identified broken genes are from the most popular performance genetics. Rather than destroy highly productive genetics the out-crossing away from inbreeding allows the qualities to remain and the defects to be eliminated.

How can cattle breeders manage these unique genes? There are a couple of strategies. First, once a DNA test is available, breeders can select the animals with the fewest number of broken genes. Secondly, breeders can research pedigrees to ensure they never mate carriers of the same genetic defect. Each of these strategies will reduce embryonic losses, while not removing important, high quality animals from the population.

In the case of a “genetic forward bounce” a Mutation or Sport may be the greatest thing a breeder could ever wish for. As the DNA of two parents separates into a concoction of various new attributes in the resulting offspring, there can be a person, horse, bovine or plant that as Webster says, “is a sudden variation in some inheritable characteristic of an animal or plant.” A Sport is an organism that is the exact 100% DNA of the direct sire and dam, yet a “sudden variation” from other full or half siblings. This mutation change is the source of every excelling species -- of every breed leading virtue. In this respect, the genetic bounce forward is the mutation every breeder lives to appreciate.

The most understood mutation can be traced back to the first polled cattle. The polled mutation factor was line-bred to produce Angus, and all the current polled breeds. Mutations can be profitable or a physical disaster -- you decide!

In certain breeds identified broken genes are from the most popular performance genetics. Rather than destroy highly productive genetics the out-crossing away from inbreeding allows the qualities to remain and the defects to be eliminated. These highly profitable genetics can continue to be profitable with correct understanding and management. The most famous defect in the Quarter Horse industry is Hyperkalemic Periodic Paralysis (HYPP) This is a natural mutation identified in the famous stallion Impressive but never identified in any of his sire or dam’s progeny. The HYPP mutation was only found in Impressive and certain of his progeny. Although Quarter Horse breeders were quite well aware of HYPP and it’s hereditary influence, his genetics continued and more World Champion Halter horses came from this line than any in history. It became a manageable mutation and thousands of Impressive progeny were not affected.