In 1967, our family was excited when we bought our first registered Texas Longhorns out of South Texas. Our first cattle had slick hair coats and smooth "little" horns.  We loved the breed. Our management was tied together with hay wire, because that was what we could afford. As a result, the cattle paid a price. We did not have good corrals, a squeeze chute, blizzard protection, a trailer or truck of any kind, barns, or any of the good management practices we would learn later were important.

Our property was on the high plains of Colorado at 6016 feet elevation with not a rock or tree between us and the North Pole. The wind was ruthless. Temperatures often dropped below zero, and water pipes froze at 50 inches underground.  As I recall, we buried them 54" down so they wouldn't freeze.

You already know where this is going. One June we noticed a favorite cow with one horn an inch or so lower than the other, then 3", then 8".  By late Summer, it hung down the side of her head.  When we worked the cows in the Fall, she bumped her dead horn in the working chute (we didn't have a side- squeeze back then) and it fell off. Over the years on more cows, more horns froze, slowly lowered, and fell off. At first the damage was not visible, because the horns were dead a long time before we could see any change.

In 1977, I went to Ekalaka, Montana, to the Belle Tower Texas Longhorn ranch.  It ran over 500 head of registered Texas Longhorns of mostly Niobrara-government  breeding. The ranch was several thousand acres of prairie with a half-dozen trees and a small stream down the middle from west to east. The cows spent the winter on the prairie with no wind breaks, seldom if any feed except grass, and the unfriendly north wind. They sported more frozen horns than I had ever seen.

There are variables, but below the 35th parallel very few horns freeze unless they are at a high elevation or in a mountain area. The further north and higher elevations are where horns freeze.

With over 50 year of watching this "freezing-phenomenon,” I have seen some consistent patterns that affect the value of huge-horned exhibition stock. 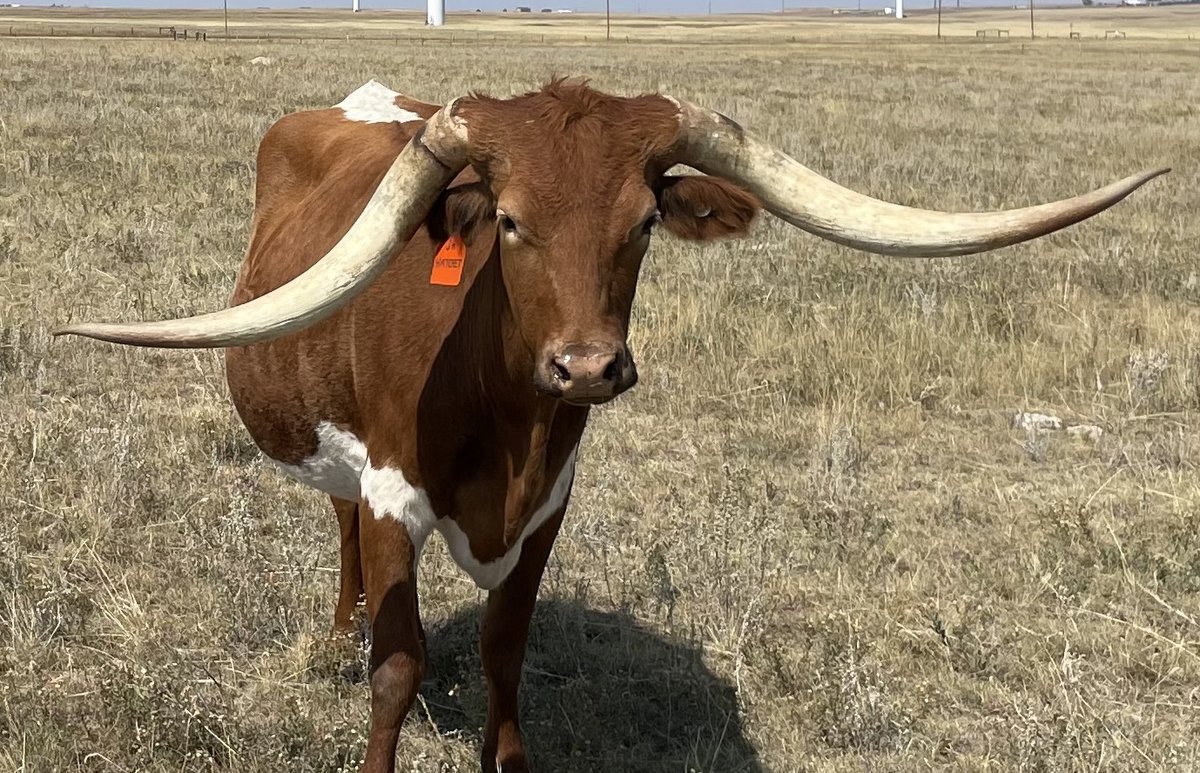 This cow has been "winterized" in cold windy country. Horn and bone are strong so it takes months to terminate the original great horn shape. 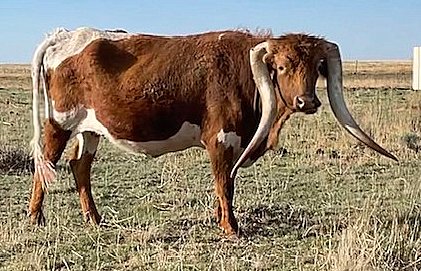 A few months later, the new horn is growing and the old frozen horn is drying up and dead.

People who have owned and bought cattle from the north and south have watched this phenomenon for 50 years. Certain factors consistently cause damage—but there are ways to avoid this value-loss.

Horns freeze easier than hide. Obviously a horn 3" thick can freeze and die, yet other parts of the body are protected from freezing by their hide covering and additional blood supply.

Temperatures in the -20 degree range will normally not freeze horns, but an added chill factor of 30 mph wind or more will almost always cause some horn damage. Windbreaks or sheds will minimize the chill factor and can prevent freezing.

Many cattle will freeze one horn while the other remains alive. Most ranchers believe that when cattle huddle during a storm, the horn extended out in the wind is more at risk than the horn that may be more protected by the herd’s body heat and wind protection.

With years of evaluation, most who have raised Texas Longhorns have observed certain phenomena. There is some consensus that cattle raised in the north country grow slower horn and a thicker horn shell. By contrast, cattle in warmer southern climates grow horn faster with a thinner shell. The thin shells are more prone to freeze than the thick ones when southern cattle are moved north. Consistent with horn, northern cattle often have a slightly thicker hide than tropical or sub-tropical cattle.

Horn has mostly three components. The outer shell is a high-protein substance with elements very similar to finger nails and hair. Inside is a porous bone of high-percent calcium. Inside the bone is a flowing blood supply. The bigger horns have more blood supply than smaller ones. Most believe that small horns freeze quicker and more often than thicker ones.

The warm blood flow creates some warmth for the whole horn. A careful hand-squeeze shows that a living horn is usually warmer than a dead horn.

Longhorns--similar to Scottish Highland cattle--grow long, heavy hair around the horn base to stimulate horn growth and help protect the blood supply in that high-growth area. Recent trends in showing, both halter and loose cattle (especially futurities) have determined that clipping (as in non-horned breed shows) makes horns appear longer. Clipping is a bad practice for cold-country cattle--and may even cause slower horn growth in general.

Cattle under poor grazing conditions have less horn-freeze resistance than cattle that are well fed with corn or grains. 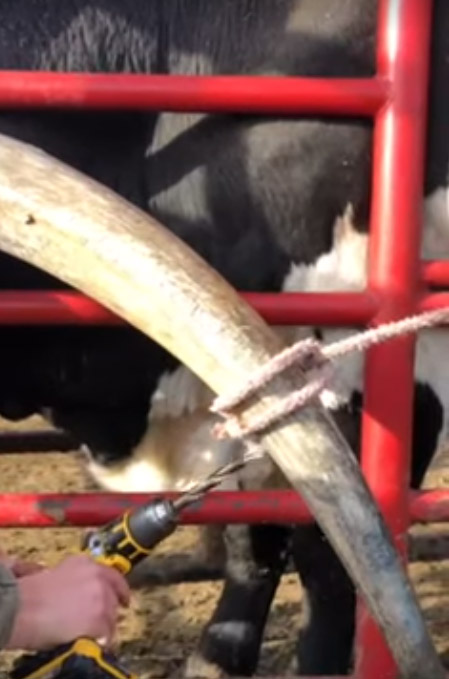 To know for sure if a horn is dead, drill a hole into it. If the horn bleeds bright red blood, it still has good circulation and is alive. If it drains with black, rotten liquid as in this clip, it is a dying horn. If it is dried out and only white bone comes out, it is dead. A drill hole is conclusive.  To learn the whole story, first drill one hole starting at 8" from the tip and on toward the head.

Deep, brutal horn rings near the head most likely are not a result of freezing, unless the horns start to droop. This trait is found on older cows who have retained a placenta or had some sickness or fever. These phenomena are not studied by university researchers, so the jury may be out on them for a while. They are not genetic and may have several causes. 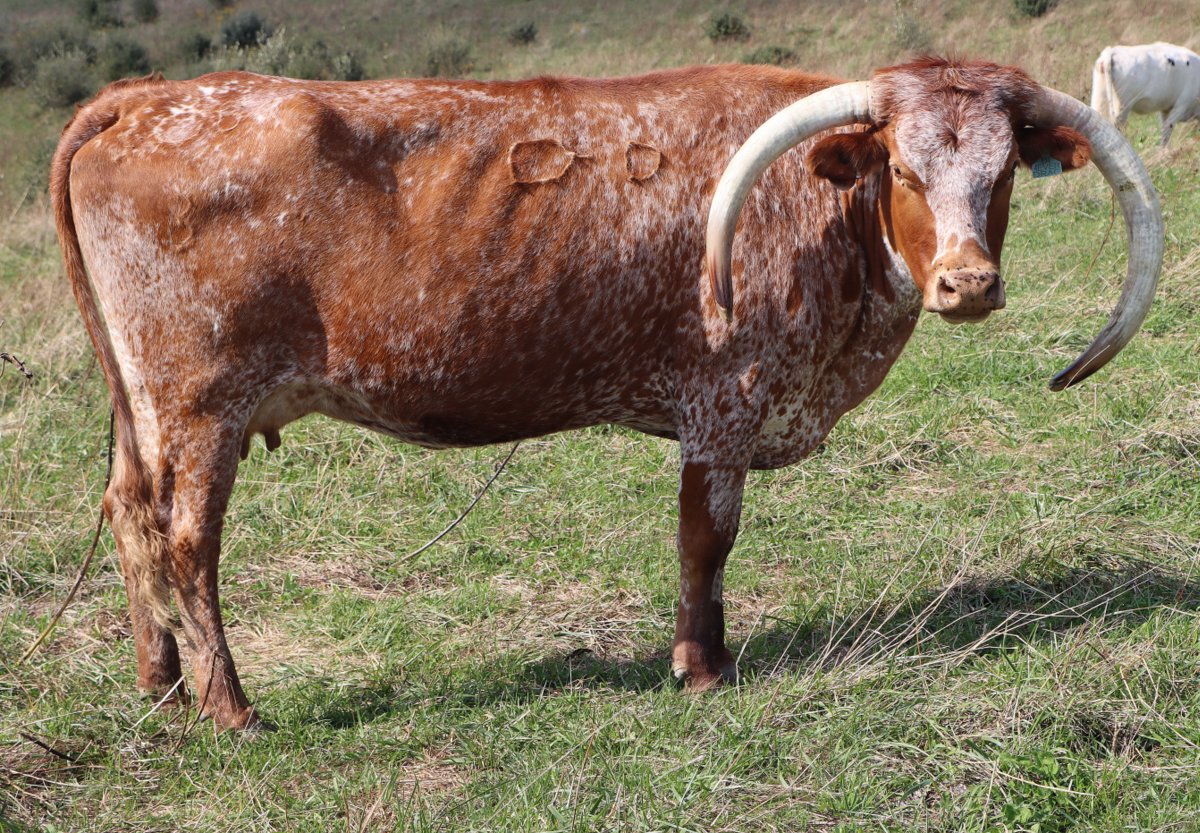 This cow had both tips freeze and die her first winter. The horn continued to grow, but the trauma caused a fake shape instead of the original genetic shape and direction. 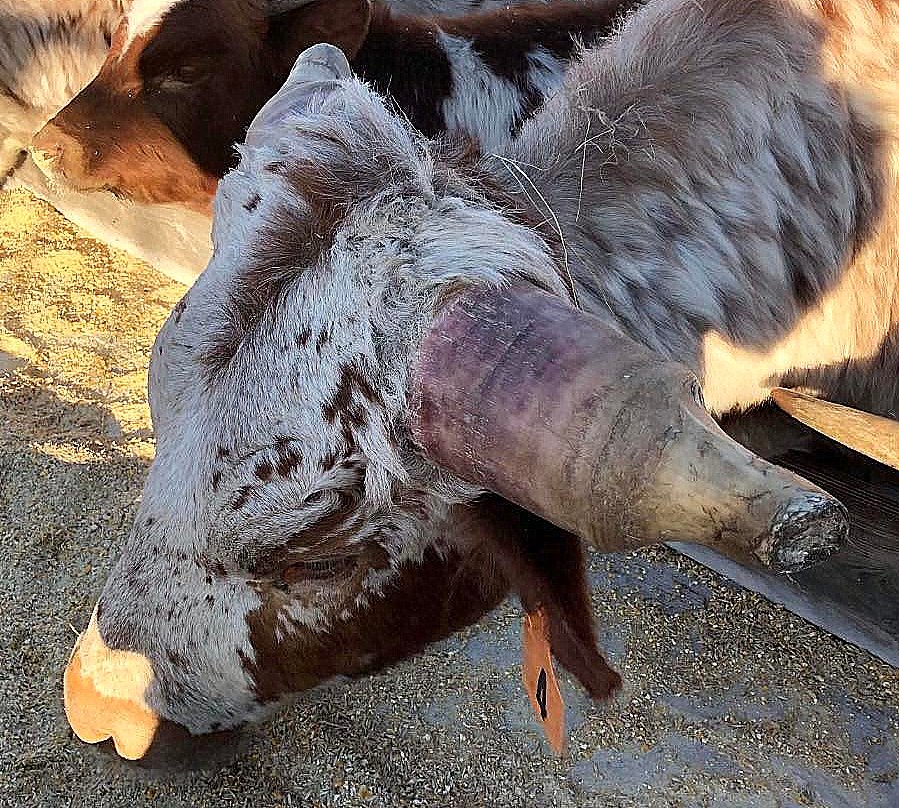 When this critter froze a horn, the inner horn sealed itself off, the outer shell came off, and this new odd growth grew out. 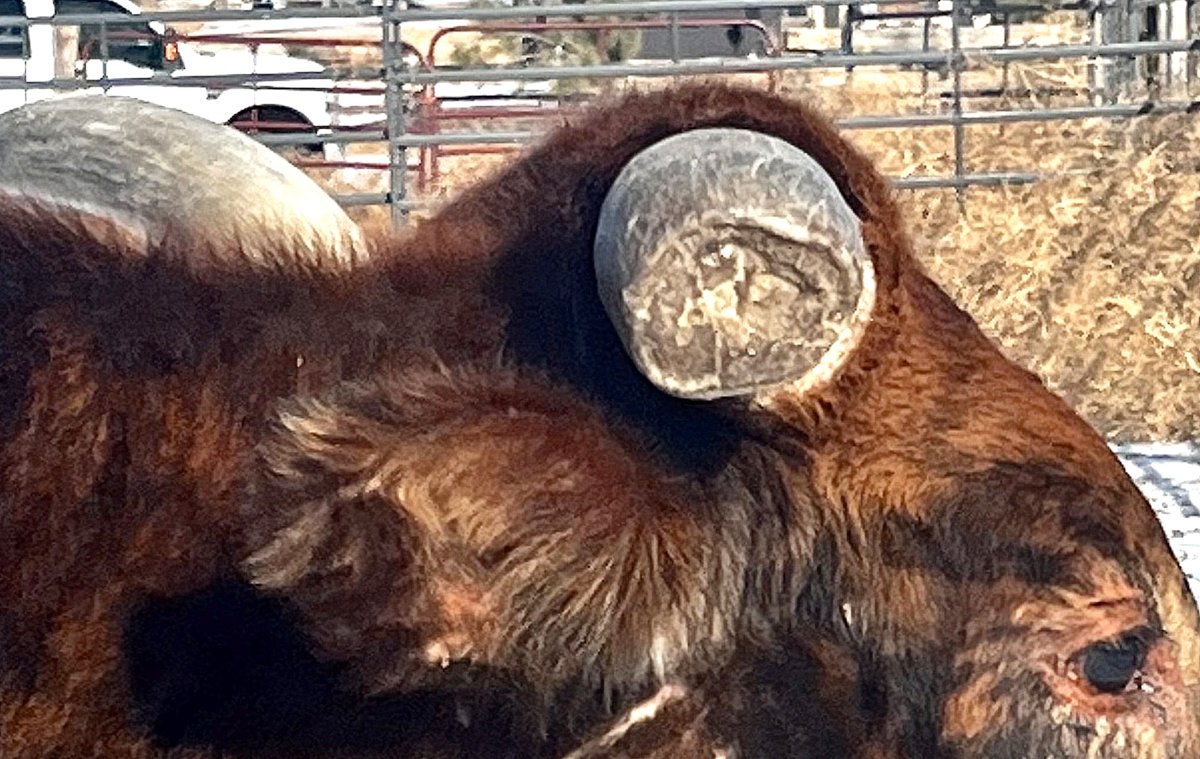 This is a typical freeze. One horn is unharmed while one dies and falls off. The inner core seals itself off and a stub of horn starts to grow back. Unlike some other animals, bovine horns grow from the head out, rather than by extension of the tips.

It is reported that the Okanagan Game Farm in Kaleden, British Columbia, has a Watusi herd with good success of retaining horns in some of Canada’s brutal Winter weather. The Okanagan shelters its Watusi with 3-sided sheds that help minimize wind chill.

Although nothing is darker than the inside of a cow, try to understand all the factors of weather and follow practices that can reduce losses.  Every rancher has to find the management practices that work at their parallel on the earth.