In 1967 I bought my first registered Texas Longhorns. Thereafter, I worked at finding every remote herd. Over the next few years I made concentrated efforts to travel to each herd I could find. 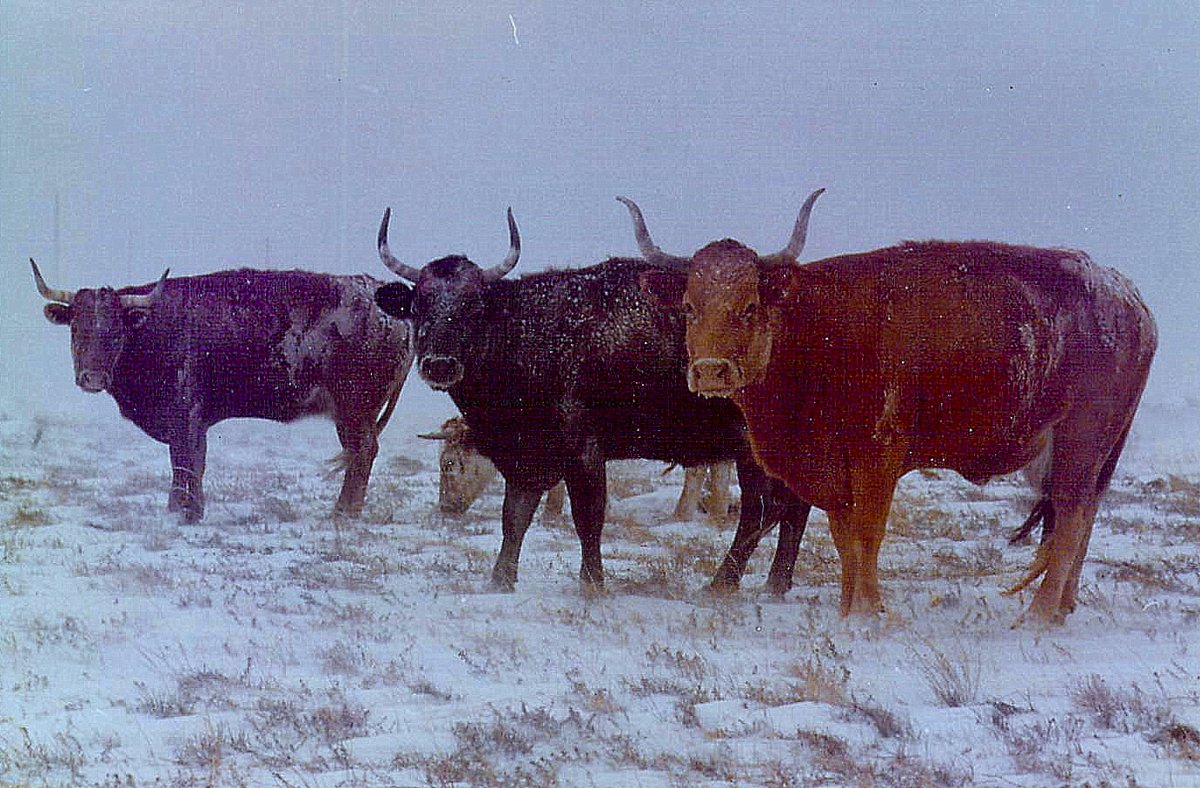 Sometime in those early years it became obvious there were 7 original, unrelated herds prior to 1930. Each of these seven families were different in size, colors, conformation and horn shapes. I was in contact with the owner of an unrelated herd with a really old history which might have traced equal to the seven families out in California. Before I could get to see them the herd was dispersed.

One of the seven was the Yates cattle. Yates cattle were bred during the lifetime of Cap Yates, a wealthy Texas oil man, who passed away in the sixties. Most of the original stock were dispersed by his family quickly after his death. The Yates herd numbered about 1500 head of rugged cows in the Big Bend area of West Texas, near Alpine. Mr. Yates felt that no breed of cattle offered the rancher what Texas Longhorns did adapted to that harsh area of Texas desert. He did, in my opinion, work at preventing outside blood from entering his program. He honestly felt any other blood was inferior to a small Spanish type Longhorn.

The Yates cows have every quality needed to produce calves in the desert. They are structurally sound and good mothers. They are a true result of survival of the fittest. Charles Schreiner III said he went to the Cap Yates ranch once when there had been several years of harsh drought. He said every cow had a calf at side. He respected the Yates cattle and had a lot of Yates blood in his YO herd.

The old Yates cattle as a group probably weren't impressive. Many were the smallest horned and most solid colored of the seven families. Yates cattle lovers have selectively bred for the families with the most color and there are some over 50" horned Yates cows. These are often real twisted as they get very old. Some Yates cows are very "long headed", "sway backed", and have high tail sets with low backs. Of all the seven, they represent the old traditional, coarse, small and rangy type. There were a few (Twist 21) truly magnificent Yates cows for horn. These few 50" cows in number probably were one in hundreds among Yates herds. The normal Yates cow had a small circumference and short horn tip to tip.

As to Yates bulls, I have never understood how to mate them. Many Yates bulls have been used but I've never seen one with truly long horns. Why weren't there some Yates bulls with 50" horns like Yates cows? I have no answer for that one. Most of the Yates bulls' horns average under 36" with a very few over that. Some well known Yates bulls possess less than 30" horn tip to tip. The big horn cattle of Yates blood are steers, and some were very competitive in shows in their old age.

Cap Yates liked the Wichita Refuge cattle and over the years traded bulls with WR several times. Elmer Parker, an employee at WR, felt the Yates blood did a lot to help the WR program back in the fifties and sixties.

Shortly after the passing of Cap Yates his daughter and son Fayette Yates assembled the best of the Longhorn type breeding stock and advertised a complete dispersal to be held at Vineyard, Texas, June of 1968. None of the cattle were registered. Registration was by inspection at that time. Edwin Dow, a TLBAA past vice president was selected to evaluate and help with the auction cattle inspection. At that time most passed for registry, and as a result it was the biggest income year for TLBAA in that era. About 100 cattle were registered and some unregistered cattle were also auctioned off. Every pedigree was listed as Yates Bull and Yates Cow -- that was it.

Bob and Virginia Purdy of Buffalo, Wyoming had been reading about Texas Longhorns. They were well known as importers and a major player in the registered Charolais business. Bob had been to France and selected what he felt were the top Charolais genetics. Now he wanted to start and develop the best Texas Longhorn herd equal to his white cattle. Bob and Virginia attended the Yates dispersal at Vineyard.

Before the sale Purdys noticed 20 weanling heifers and one bull back in a separate pen from the sale cattle. Fayette said he was keeping those. They were his picks of the whole herd.

The sale cows and pairs averaged about $290 per lot. The Purdys did not buy anything. After the dust settled Bob asked Fayette what he would take for the 21 keepers. Fayette tossed out a testy price of $300 each and that was the start of the Purdy herd. In about 4 years Bob Purdy was installing a soap dish in their shower and due to some miscalculation his electric drill hit a hot wire and electrocuted him. Virginia continued with the ranch and Longhorn herd. I would visit with her at the NCBA convention and other cattle gatherings. Virginia had one hand missing and always hid it in her pocket. The day came when the burden of the ranch overloaded her. She decided to liquidate her huge cattle herd. She called and asked if I was interested in purchasing her cattle.

When I got to Buffalo the cattle were very fat and pretty. I selected my picks of 10 cows with the best conformation and horn spreads. My trailer would hold 10. The price was $500 each. Before we loaded the cattle I saw a barn full of wheat straw. I ask Virginia if I could get a couple bales to lay on the trailer floor for bedding. I had just given her a check for $5000. She said the straw would be 75 cents per bale, so I gave her $1.50 and we loaded the cattle.

These are three of the Yates cows bought from Virginia Purdy. The middle cow was sold to Richard Robbins Jr and he retained several sons of her for breeding. The cow to the right was Dona Yates 3. All had one of the three Y brands which was registered by Cap Yates.