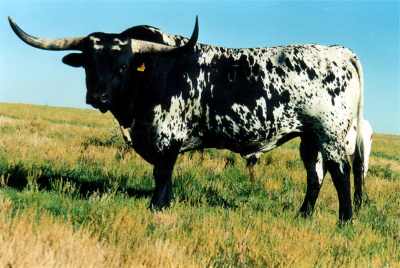 He is an own son of Measles Super Ranger, out of a daughter of Wichita Classic. He has near 52" horn, is a beautiful splotchy black & white color & has the famous Measles Super Ranger type. He is real trim in the neck & underline & has a beautiful small head. His lines are very straight & correct. He is larger than his sire Measles Super Ranger. His body weight fluctuates in the 1,800 lbs. range. His heifers are absolutely beautiful & of high quality show potential. A small number of semen units available. Lots of very attractive black speckled calves.

Bios For Just Cause 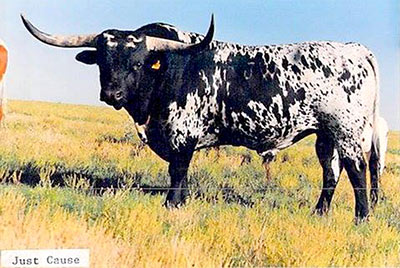 Just Cause ~~ Just Cause was bred and raised by Jerry Williams, Austin, TX, the first acting President of ITLA. He was a striking son of Measles Super Ranger and I believe the best ever son of MSR. He had the same smooth trim conformation, a great round full hip, the Measles type, and the exact spot pattern, plus black. JC's dam traced to Classic and Jeepers Creepers, a half sister to Measles. He was a top horn spread of 52.13" and his famous sire only maxed out at 45". He weighed 1710 lbs.

The Bass Brothers own large real estate holdings in Pagosa Springs, Colorado. That is the same people who own El Coyote. J. R. Ford manages the development in Colorado and also runs a Texas Longhorn herd quite separate from the Texas ranch.

Jerry Williams sold Just Cause to J. R. and he used him 4 years. When J. R. had a lot of daughters he called DCCI and ask if we wanted him. I liked the bull but for some reason did not buy him. As an individual he was much better than MSR.

One day in 1995 J. R. called and said he was finished with Just Cause and had an appointment to process him at G & C Packing in Colorado Springs, Colorado. If I wanted to see him and or possibly buy him he would bring him to the ranch at Ellicott, Colorado for me to look at. When J. R. showed up and unloaded Just Cause he was beautiful. He was much bigger and better horned than MSR.

Back in the late eighties my kids and Linda enjoyed a fainting goat breeding project at the ranch. We had made an effort to breed some fast and frequent fainters with wild and pretty colors. These little goats would faint and fall over like they were shot if anything happened to scare them. The corrals were right by the goat pens and when there was cattle activity goats were falling everywhere. J. R. started watching the goats and was equally amazed. We had goats everywhere, maybe 60 fainters. I told J. R. he could have a dozen goats for Just Cause. A deal was done. They were easy to catch - you just walked in the pen and when one fell over you picked him up and loaded him in J.R's trailer.

DCCI collected semen on Just Cause and ran several ads on him. He was bred by DCCI in 1995 and 1996. He sired Just It, Just For Kicks, Just Say Yes, Just Fancy, Just Zawe, Just In Time, Just Cause, Just Rosy, Just Score, Just Delight, and Just Right. In 1997 he was sold to Ner Farms of Oshkosh, WI.

Just Zawe was out of Lethal Zawe the origin of the Zawe cattle family. Much like his sire MSR, he sired few known sons but many beautiful Measles looking daughters.