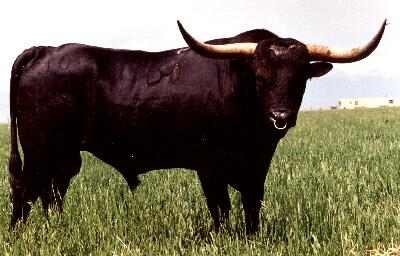 He is sired by Lockhorn, out of Choya, by Don Quixote. He was the tallest & longest, black Texas Longhorn bull in the early industry. He has 56" horns tip to tip. He does many of the same things for his progeny that Don Quixote did, except he sires more height, length & horn. He has the small ear, trim underline & the big bold Mexican appearance. Quill sires about 40% brindle & speckled calves & over 60% black or black speckled calves. Many are using Quill as an antidote for lighter colored smaller genetics. His most famous daughter is over 70" Sarasam, the widest horned black base cow in history. He was trained to ride and had a smooth fluid lope, turned and stopped well.

Quill, was an underestimated and overlooked bull and a leading sire of over 60" daughters. in the 1990's

Numerous bulls then were known for a few over 60" daughters, but probably no one listed or acknowledgeed Quill as a very high percentage sire. Although he had less than 10% as many registered calves as Measles Super Ranger, he has over half as many over 60" daughters. It’s not how many quality animals sired, but rather what percent achieve the high quality status. Let’s look at the Quill record.

Quill was bred and raised by DCCI and his second owner was Linhill Farms of South Carolina.

Quill at the time of his passing had near 60" himself.

Quill’s top weight was 2020 lbs. At one time, he was the first and only over one ton black bull.

Quill’s sire, Lockhorn was one of the first over 60" sires. Lockhorn was bred and raised by DCCI. Later he was bred or owned by: TD Kelsey, Tom Brundage and El Coyote.

Quill’s daughter "Quills Fet" was over 60" and produced an over 60" Shadow son.

Quill’s daughter, over 60" "Zuill was dam of Zanzibar, a DCCI herd sire.

Quill’s daughter "Quillette" was over 60", the dam of two fine herd sires.

Quill was sire of "Quorum" a young sire of great color and horn.

Quill was broke to ride and moved smoothly not only at a walk but he would circle and figure 8 at a lope. Great disposition.

Quill semen is still available at only from DCC. 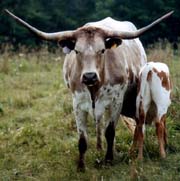 Sara Sam - Horns over 69" - pictured at age 6
Sara Sam is half sister to Sadie Sam out of Samsara. Half sister to Raffles.