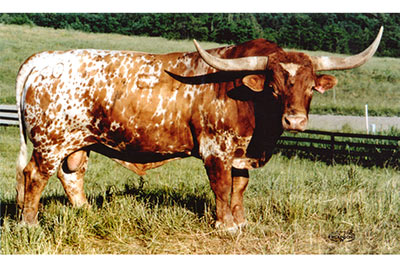 He is the leading Longhorn sire of thickness. Many use Gizmo to add substance, color, and milk production to herds. He is sired by Zhivago and out of Blazon by Jet Jockey. Blazon is out of Rose Blade by Don Abraham and out of Ranger's Rose by Texas Ranger, out of the famous Butler cow Rose Red. This blend pedigree combines the greats of the breed. Those desiring thickness and rich red appaloosa color go for Gizmo. Gizmo is the sire of International Champions Paladin, Winchester, Remington, Detonator, Legacy ITLA Champion, Gizette and numerous beef type and colorful progeny. He weighed 2120 off cows in his prime. He sires more thickness than any bull used by DCCI. See him on You Tube.

Gizmo ~~ was born in 1993 a son of Zhivago out of Blazon who was a dark mahogany spotted daughter of Jet Jockey. He is historically best known as the sire of Winchester. Gizmo was born on DCCI, then located in Colorado, and shipped with a semi load of TL cattle to the newly acquired grasslands of Ohio. His name was a result of the DCCI policy to use a "Z" letter in most of the Zhivago progeny.

At birth Gizmo was a beautiful dotted color, rapid gaining, and led the calves with a 601 lb 205 day weaning weight. (Very few TL calves ever go over the 600 lb 205 weight.) His largest mature weight recorded was 2080 lbs.

Gizmo started his breeding career at DCCI as a yearling and serviced for 9 years. Only 2 DCCI bulls were ever used more than 9 years. His special quality was to add size, bone, thick conformation and pretty colors to the herd. As a correcter, he was often given small cows with less than desired small substance, or even frail frames. With light bone and small frames comes light weights -- Gizmo was the opposite being big everywhere big could be. Like his sire, Zhivago, he was sleepy, quiet and very hard to photograph. As a result he had no poise, just stood around like a huge but friendly slob.

Today Gizmo semen is available and recommended for the most extreme introduction of thick, heavy boned genetics. If TL cows are under 1000 lbs and need more size for normal beef production, Gizmo is the specialist. No bull in the TL breed can add substance and size any better than Gizmo.

Gizmo's genetics are famously perpetuated in his great breeding son Winchester, the ITLA All Age Legacy National Champion cow Gizette, Remington, Paladin, Durango, Volunteer, and Silent Shout. His genetics trace back in the pedigrees of Drag Iron, Win By A Mile, Clear Win, Jester, Winning Smile, Win Win, Clear Point, Jamster, etc. The daughters remaining on DCCI by Gizmo are the largest cows in the herd.

Gizmo was purchased 12-4-2004 by Hernando Limon Martinez of Baja, Mexico. He also purchased 82 head of breeding stock for development of a pure Texas Longhorn, Mexican herd. Gizmo no doubt has more progeny in Mexico than the USA.