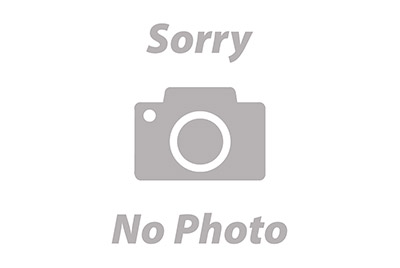 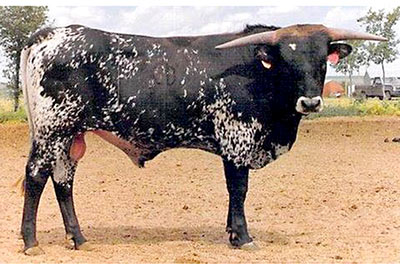 "Gun Man" ~~ On March 1, 1979 I was setting on a feed bunk at Liberty, Texas and did the deal to purchase the entire "Uncle Dode Partlow" TL cow herd. (It was a semi-full). A pretty spotted cow, probably sired by Conquistador, lay down across a small swamp and gave birth to a mostly white looking calf. As a young calf there was a lot of skin under him and I did not think of him as a herd sire prospect, however Bob Shultz (see chapter one in the FILLET OF HORN book) bought him and his dam, Shenadoah and registered him as Colorado Cowboy. I was wrong, he was a breed improver. Colorado Cowboy sired G-Man for Rex and Sherese Glendenning.

In the late eighties G-Man was the widest horned bull in the breed. I purchased 100 straws of semen from G-Man and bred him to several Senator and The Shadow daughters. Once the 100 straws was used up, the young bull Gun Man was born out of a Senator cow, when DCCI was in Colorado. Later the famous over 100" steer Sequoia Man was born from one of the 100 straws. Gun Man was bred to cows by DCCI as a yearling. He was the widest horned bull of that year's crop. Ron Jones of Salida, Colorado had purchased 3 herd sires (Rangago, Jump Start) and needed an unrelated 4th bull. Ron bought Gun Man and bred him to Rangago and Jump Start daughters. As a result Ron, who was a dentist, retired from looking down throats and became a very successful Texas Longhorn producer and has raised truck loads of great cattle mostly all going back to Gun Man.

G-Man sired Heavy Hitter who ruled as the widest horned bull for years, and still stands tall at 84.5" T2T.

As a result of Gun Man's genetic strength he can be found in the pedigree of famous cattle, Cowboy Tuff Chex, Rodeo Max, Auze EOT, Rio Grande, Grand Slam, Vanilla Milkshake and herds of great cattle in every state.

The many times Champion, over 100" steer Sequoia Man was sold by DCCI to Wayne Forester, then Bill Hudson, and several lovers of awesome steers have owned him. And the rest of this story is -- this very week, Sequoia Man has been purchased by DCCI, from Lazy J Ranch, and is riding east to spend his senior years at DCCI in Ohio. See him at DCCI and watch history walk the Appalachian foothills near Barnesville, Ohio