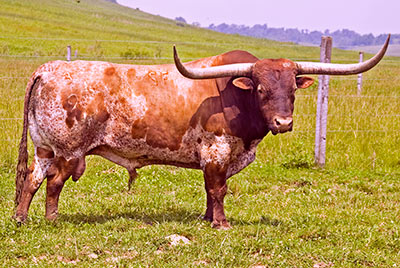 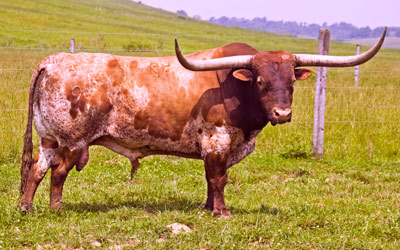 Bogus Bonus in his Prime

Bogus Bonus ~~ In 1998 I sold Quilla Fet to Ralph Demshar of Ravenna, Ohio. Ralph had a modern camera store, did a world of business near the university, and decided to start raising Texas Longhorns. He had a pretty place in a beautiful Ohio semi-rural area where he raised blooded Arabian horses. He wanted a few Texas Longhorns, but only the very best. Quilla Fet was the best Quill daughter ever. She was huge, dark seal brown spotted and bred to The Shadow. At that time she was pretty pricey, but Ralph bought her anyway. The following year he sent a photo of one of the prettiest Shadow calves ever. He was spotted like his dam, a huge hip and everything you could want on a young bull. I ask about buying him -- the answer was no. He had 3 cows, including his mother, and when he was old enough he wanted to use him for breeding them all.

Every year or so Ralph would send a photo and I would try to buy him. It was starting to appear that this unregistered bull was the best son of The Shadow - he just kept getting better. I asked to buy him nearly every year -- time went on. Always not for sale. He called him "Grump."

When he was about 7 years old something happened. I didn't get in the loop. Ralph sold his little breeding package of mostly daughters of Grump, and Grump to a neighbor. The new owner sent me photos -- this bull was really nice now. Again not for sale. The bull was so gentle he would eat out of your hand, but was a little pushy and if the feed didn't come quick he would slowly, methodically just walk over the top of who ever was holding the bucket. The owner got scared of Grump. After a few aggressive moves by Grump the owner got real scared. To increase the problem there had been some bull calves born, that weren't castrated, and now they were old enough to fight Grump and were regularly tearing up corrals and fences. The owner called me fall of 2008 and said he had decided to shoot all the cattle as he was scared of them and couldn't load them in a trailer. I made an offer of about $1000 each but had to take delivery in the pasture -- no promise of capture or corralling of any kind. Grump was finally mine, if we could load him.

I called and old friend Denny Thorsell at Medina, Ohio, who owns the Bucking Ohio Bull riding arena. Denny's son Shawn is a regular bucking bull handler. I got Shawn and some really serious cowboy friends to go capture Grump and the whole family. It wasn't easy - it wasn't pretty - horses were sweaty-- some fences were wrecked - the owner was scared to death, but about 4 hours later the cattle unloaded at DCCI, tired, scratched up, alive. It had been a day they would never forget.

We ground all the cattle but Grump as they were sinfully inbred. He was beautiful. He was never a problem to handle. We had immediately decided to collect semen on him, but the plan was to wait until after breeding season. We registered Grump as Bogus Bonus, at the time when the federales in charge of Fanny May and Freddie Mac had badly managed the tax payer's billions and gave themselves a few million $$ as a going away bonus -- a bogus bonus.

We had to wait from fall to June to use Bogus. When the day came, he was given about 50 cows. He was so happy. You could see the smile in his heart. If a bull could do cart-wheels, he would have been doing them. As I checked his pasture he was on the move -- constantly checking for new business -- just being friendly. As he walked the pasture his thick hip and deep girth was more than impressive. He was a special bull.

About a week into breeding season I saw Bogus standing in Muskrat Creek. It was hot, so that was not unusual. I told the ranch cowboys to check on him and the next day they said he was still standing in the creek. Finally, after about 4 days I said drive him out of the creek up to the cows -- then they saw it. It appeared like, somehow, he had entangled himself some way, he had cut the hide right below his knee and the skin had ripped down and was around his foot. The bone and tendons between the knee and ankle were mud-covered, but totally exposed -- contaminated in every way, swollen huge. On July 10, 2009 the vet said there was no way to save him. His skull was polished and sold to Seth O'Hara Bellamy for carving. (Click here to see the carving on his magnificent skull.)

The following year 5 calves were born from Bogus Bonus. No semen was ever collected. Bogus was an investment that had to be. A great genetic plan exploded into no man's land. A beautiful dream turned into a very sad nightmare -- sorry, but that was the unhappy ending. Most endings are better.