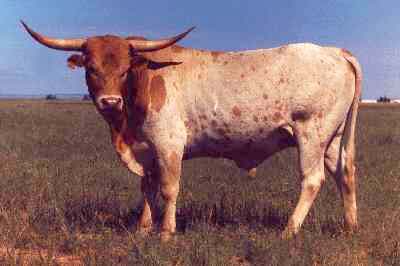 He is sired by Two Tone, out of Brazos Belle, all Phillips breeding. By every calculation, he has done more for the Longhorn breed to bring them into the limelight than any other sire in history. Not only does he sire great sons & daughters, his sons & daughters often reproduce better than themselves. The lineage goes on getting better & better. Every All Age World Champion bull & All Age International Champion bull in history have traced back to Texas Ranger in their pedigree. He is the only bull in history to have that merit. Young progeny are few & far between due to the fact there is only a small amount of semen left on the famous old Texas Ranger JP. Use him to perpetuate the miracle of AI conception 30 years after his death. (1968-1983) His lineage, like Win Win, trace line bred 25 times to Texas Ranger. 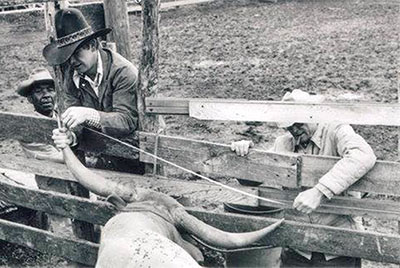 Texas Ranger JP - This is the historic measurement (about 1974) of the first 48" TL bull, Texas Ranger, JP. Measuring are TD Kelsey left and J.G. Jack Phillips Jr on the right. This was the greatest of the foundation bulls of the breed. He is in every pedigree at DCCI except one cow. He contributed flatter horn and larger beef conformation. Winchester is 21 times line bred to TR. It is easier to find cattle with Texas Ranger in their pedigree than those without him.