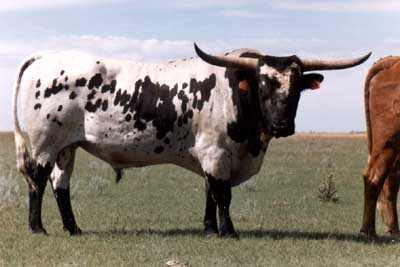 DOB:
Color:
He is a son of Don Quixote, out of the famous Wright cow #1042. His beautiful mother sold for $30,000 & produced Don Abraham after the time of her purchase. Don Abraham is the sire of Abraham the All Age Grand Champion bull at the World Show in 1995. Don Abraham is more highly appreciated for his ability to sire wonderful females than herd sires. Use him for type, black, and trim necks. 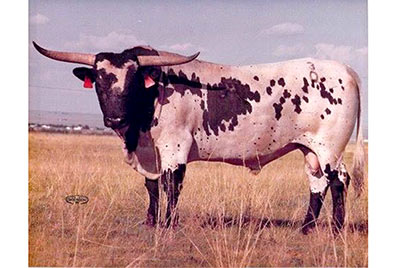 DON ABRAHAM ~~ Many famous bulls had long names and history chose to shorten them. He was Bar M Don Abraham 3/0.

The Wright TL herd had a high horned silver grullo cow who was beautiful. Her registered name was Damn High. Many tried to bu>y her and finally Jack Montgomery got her for $30,000 in 1980 bred to Don Quixote. She had a thick black spotted bull who won some shows; he was very correct. I thought Don Abraham was the best black carrier by Don Quixote and tried to buy him from Montgomery. Montgomery tried to collect semen on Don but was unsuccessful at every collection place used. DA produced mixed liquid semen with electro ejaculate technique and was impossible to collect with an artificial vagina. When men with the AV came up close to him he would drop down and refuse to service. Montgomery spent a lot of money wanting to collect him. There was a lot of interest in purchasing his semen.

The day came when I traded my half interest in Measles Super Ranger for Don Abraham. I had a plan. We immediately started a training process for DA semen collection. About every 3 to 5 days we would put DA in a pen about 30' square with a cow in the middle of standing heat. When he decided the time was right and started to mount the cow, Za Johnson, DCCI ranch manager would approach him from the right flank with a white 5 gallon bucket -- he immediately dropped off and refused service. He was removed from the pen. The same process was repeated over a dozen times. Finally about the 20th time in about a 2 month span, he serviced a cow with a bucket pressed against his lower flank. With a few more training sessions he was trained to collect being touched by a white bucket, and off to the semen collection center he went. All the frozen semen ever used from DA was collected that following few weeks.

As a result of the Don Abraham influence he sired Signal, the dam of Circle K Donovan. He also sired Rose Blade the grand dam of Gizmo, sire of Winchester. He sired Abraham All Age World Champion Bull. Way back in the pedigree of Iron Hail, you guessed it, there is Don Abraham. Today if you breed to Drag Iron, Jamakizm, Iron Hail, Clear Win, Winchester, or many of the great Loomis cattle, there will be Don Abraham in the foundation and possibly the one single sire who passed on the black genetics to most of the black base cattle of today. Now you know the rest of the story and the importance of a white 5 gallon bucket that helped create some historic genetics.